The Kushinagar was founded by the Kusha the son of Lord Ram of epic Ramayana the king of Ayodhya , it was then known as Kushavati. It is located on the banks of river Hiranayavati , this place was also a capital of Malla Kings during the Lord Buddha’s time. This place can be reached from Varanasi or Gorakhpur by road

Lord Buddha prior to his death spent his days many times as most of the Malla’s Kings were his admirers.

Lord Buddha decided to spent his last days at Kushinagar because of many reasons (a) It was the proper venue for preaching of the Mahá-Sudassana Sutta  (b) Subahadra  a 120 year-old Brahmin who, after getting attracted to Buddha’s speech, expressed his desire to join the Sangha, and is believed to be the last monk to be ordained by the Buddha and became  an Arahant  (c) Brahaman Dona lived here who was respected a lot, sorted the dispute of distribution of relics after Lords cremation . 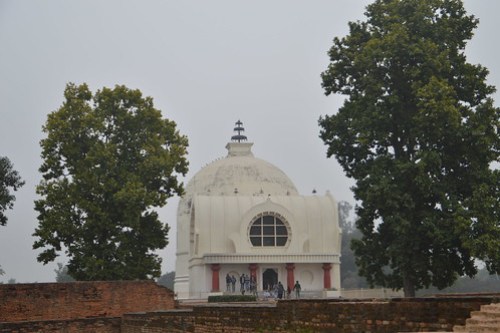 According to a late tradition, one-eighth of the Buddha’s relics were deposited in a cairn in Kushinara  by the Mallas Travelling in stages via Pava where he ate his last meal, offered by the blacksmith Cunda, he reached the final resting-place at the Saala grove by the bank of river Hiranyawati  in Kushinagar, it was  the full moon day   (Vaisakh Purnima) in 543 BC. He told Ananda   to prepare a bed for him with its head turned towards the north between two Saal trees The Buddha was lying on his right side  with his head to the north when he breathed his last, his body was taken into the town by the northern gate and out through the eastern gate , After the cremation, the relics were divided into eight equal portions by the Brahmin Dona, who distributed them to eight clans. (1) King Ajatasattu of Magadha (2) The Licchavis of Veshali (3) The Sakyans of Kapilavatthu (4) The Bulians of Allakappa (5)  The Koliyans of Ramagama (6) The Mallas of Pava (7) The Brahman of Vethadipa (8) The Mallas of Kushinagar , the Urn was kept by the Dona himself ,by the time  the Mayurans of Pipphalavana  arrived the distribution was done so they took the ashes , these people on their way to respective place raised eight Stupas for the relics, a ninth for the Urn, and a tenth for the ashes. 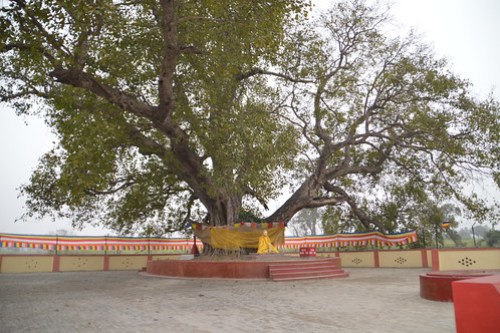 Lord Buddha’s Ashes were distributed under this tree

The place of lord Buddha’s death,  became one of the four holy places declared by the Buddha to be  places of pilgrimage for the pious.

The significance of this region is also due to being Link – route  of ancient highways, among them were important highways Ayodhya – Janakpur (Bihar), Rajgrih – Vaishali – Shrawasti, Maharshi Valmiki’s Ashram, Ashoka, the great Mauryas, Pillars routes, passing through this district.

The remains of the Parinirvana Stupa and Parinirvana Temple, when rediscovered, were covered in a 40 foot high mound of bricks surrounded by a dense thorny forest ,  around 1861–1862 it was suggested the site to be that of Gautama Buddha’s decease. Although no decisive evidence was found to prove  supposition that the site known at  Matha  Kuar Ka Kot  was Kushinara , a series of monastic seals with the Sanskrit legend Mahaparinivane caturdiso Bhiksumghah were taken to show that by the late Gupta period the site was understood to be that of the Buddha’s last breathed  . 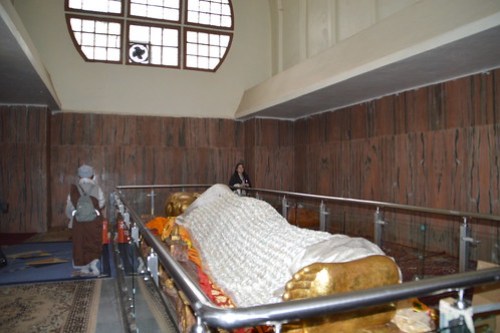 Lord Buddha breathed his last at this place

Kushinagar was a capital city of the Malla kingdom of ancient India . Many of the ruined stupas and viharas at Kushinagar date back to 3rd century BC to the 5th century AD when  prosperity was at its peak.

This region was an ideal ‘Meditation Place’ for sages, saints hermits and Mahatamas who were attracted by its pious. tranquil and charming natural surroundings.  Archeological excavation has yielded rich collection of antiquities. Artistic artifacts and statues of various gods and goddesses.