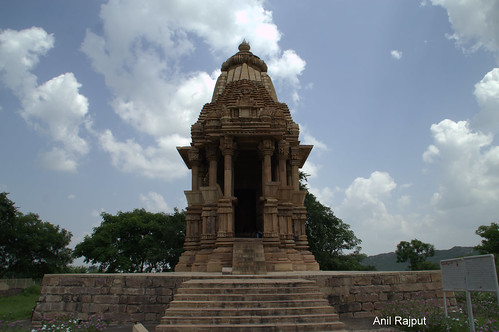 Standing over a platform with entrance from the West , it is normally  not seen in the Hindu temples but rest all the architecture needs are taken care of like the Mandapa , Garbhagriha and the Shikhara , there are images of Ganga can be identified with the presence of Crocodile and Yamuna can be identified with Turtle , there is a beautiful image of Lord Shiva in his Ardhnarishwar ( half man , half woman) carvings along with the heavenly life . 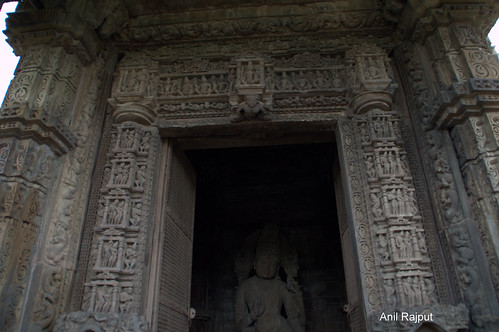 Main entrance , tallest statue among all the temples at Khajuraho

The main idol is suppose to be of Lord Vishnu but the close observation gives impression of three bodies in one , head with Jata ( hairs) of Lord Shiva , the four arms carrying Lotus, Conch , one arm showering the blessings and the other is giving the Abhay ( fearlessness ) , the standing pasture with one leg resting on toe is a Lord Krishna dancing style ( Incarnation of Lord Vishnu) , near the main idol there are images of Sura – Sundari . 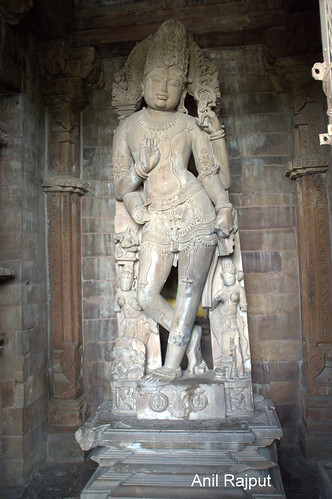 Beauty of this temple is seen  at sunset the sun comes streaming in and falls on the figure, lighting it in such a way that it appears to be full with life.