Devi Jagadambi Temple also known as Jagadambika Temple , built by the Chandela rulers between 1000 AD to 1025. AD  originally it was dedicated to Lord Vishnu as the East facing door, the prominence given to the Lord Vishnu on the doorway to the sanctum. 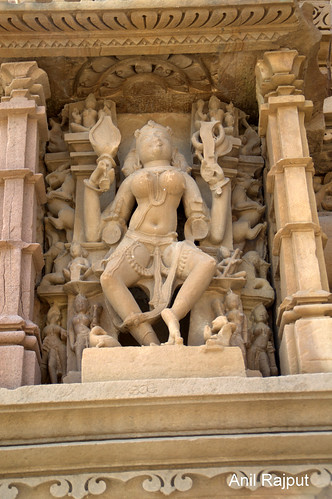 Few believe it a Parvati Temple and that Ma Kali image  ( Jagadamba) is actually an image of Parvati, painted black . The temple is on the same platform  the Kandariya  Mahadev but  small in height . The Garbhagriha is having a huge image of the Goddess (Devi) of the Universe (Jagdambi), 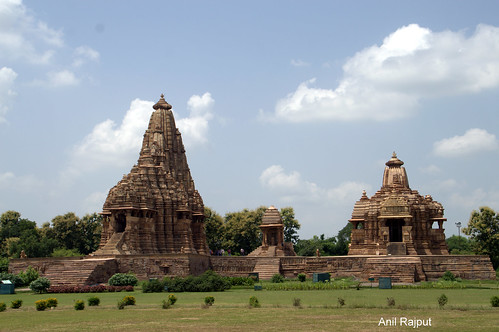 It has  only one set of balconies, only one Mandap and no inner Pradakshina , It has some of the beautiful images in sculptures  . Apart from the normal female figures applying make-up and preening themselves, there are a number of lovers embracing and assigned to honor love and conjugal harmony, with figures of the divine couples and others depicting every mood of love , a mischievous woman tugging at lover’s beard . 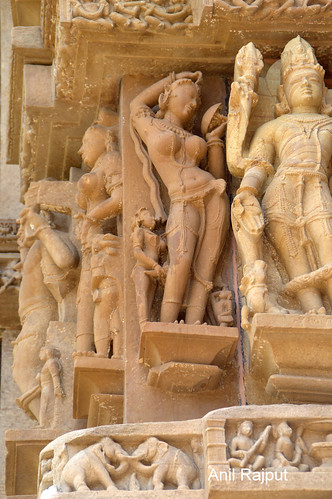 A woman with her beautiful back turned to the onlooker she is preoccupied in gazing at her beauty in the mirror, her scarf falling over her  shoulder most provocatively.  Images of Lord Vishnu, Lord Shiva and Lord  Brahma embracing their consorts. The south side has an image of Varaha, depicted with a human body and a Boar head, emerging from the primeval waters carrying the earth Goddess Bhudevi on his arm. She has placed her hand affectionately on his snout as if to pat the Boar and thank him for rescuing her.