Mishing or Miri migrated few century ago from the hills of Arunachal in search of fertile and safe land, they are one of the most colorful tribe fun loving enjoying the life, have their own music, musical instruments, dance and songs for different occasions.

Worship mother Sun and father Moon and believe that their ancestor Abotani ( the first man on earth) as their son, they have their own religion “Mishing Faith” the two forms, Animism and Vaishnavism, are two different ways of religion, but they have coexisted in the Mishing society without any conflict . 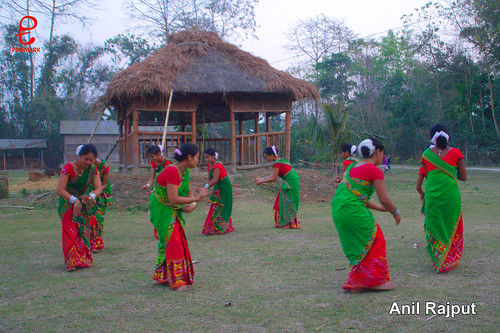 Strict rule for not to marry in same clan or different clan but have a brotherhood.Most of the marriages are with elopement and then seek the blessings from elders, arrange marriages are quite often when two three meetings are done over a plate of rice and home brewed Beer . 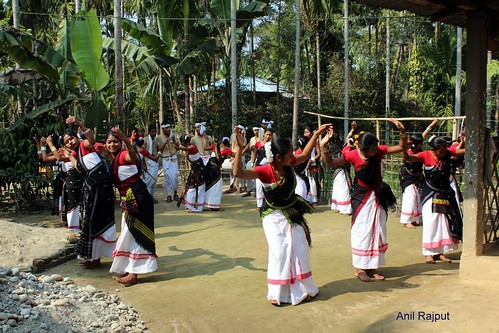 Houses are stilted made of bamboo over the wooden posts and beams, floor and walls are of bamboo, it has a thatched roof, houses are in cluster with granary and cowshed, poultry, piggery and goats are quite common, Fishing and growing different variety of paddy rice, mustard, pulses, maze, tobacco, vegetables is main job, they prepare two type a rice beer and greet their guests with it. 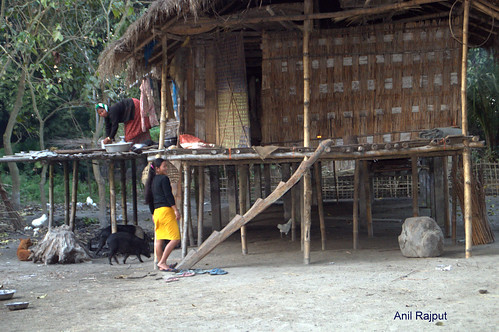 Traditional institutions like Murang is a community bachelor boys home which performs the protecting role for the village , Mimbir Yame  is a group of young unmarried boys and girls who are taught Mishing ethics, discipline and community rules, farming , house making , wedding arrangements or any where help is needed they take care .

Each village has its village chief and ( Kebang) council who take care of village community his words are final in matters to the faith , small disputes and crime , person found guilty are punished. The Bane Kebang is group of two or more villages council Jurry consisting of selected elderly people , judgement delivered is honored by all. 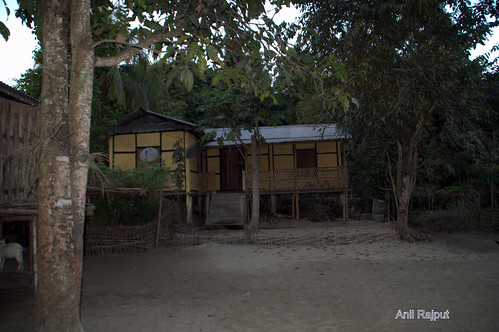 Weaving is part of every household. they have been making cotton and silk cloth even with growing of cotton , rearing the silk worms , spinning the threads, dying and then weaving the famous varieties from Assam . 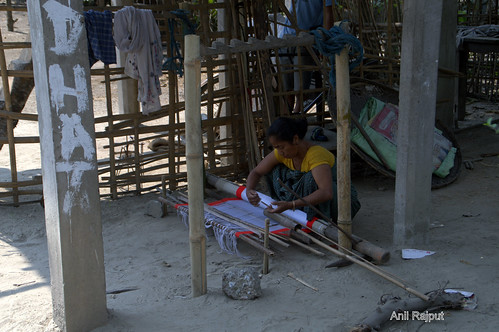 Mishing textile piece, called gadu. It is the traditional Mishing blanket, fluffy on one side, and it is woven on a traditional loin loom. 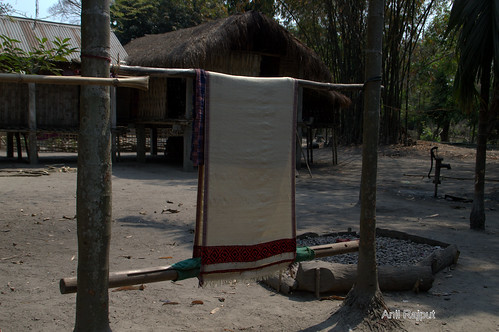 Making use of bamboo for their daily use items , wood work is limited to boat making only. one can see a canoe with each house hold. 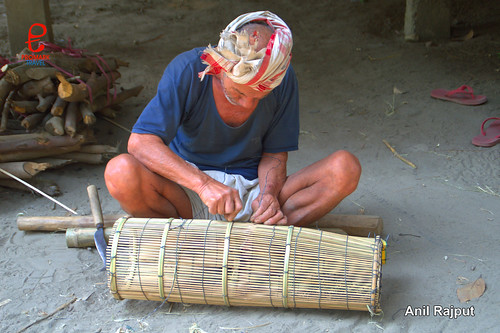 There are several dances and festivals of the Mishing tribe. Their dances are called Paksong or Soman similar to Bihu , three type of songs are sung , Aku singers sings about the history and culture , Oi and Anu nitone are love songs , modern instruments along with traditional Bansuri (flute) clapping of metal bells are used.

One can reach Majuli from Jorhat by road to Nimatighat cross river Brahmaputra 1.30 hr. ferry to Kamalabari Ghat and then jeep/bus to Gramur , it is also a port of call for river cruise M.V. Mahabaahu