Pather Sahib gurdwara is located on Leh-Nimu road 25 km from Leh , this place is equally respected by Buddhist Lamas , Hindu and Sikhs . 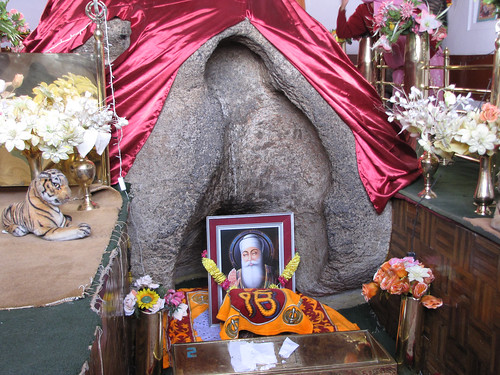 Guru Nanak Dev Ji traveled to Nepal, Tibet and Sikkim during 1515 – 1518,  on his return to Srinagar he stopped here and came to know about a demon who troubled the people in this area and wanted his help , to bring  him on the right path Guru Ji sat here in meditation, upon knowing , the demon rolled a big rock from the height to kill him but the rock upon touching Guru Ji’s body became soft as hot wax   the demon thought he had killed him and came down to kick the rock away , to his surprise his own feet got embedded in the soft rock and also saw Guru Ji alive , he realized his mistake  touch Guru ji’s feet , asked for the forgiveness and promised to serve the people for good , since then until 1965 the local people preserved the rock and worshiped it they fondly call Guru Ji as Nanak Lama . 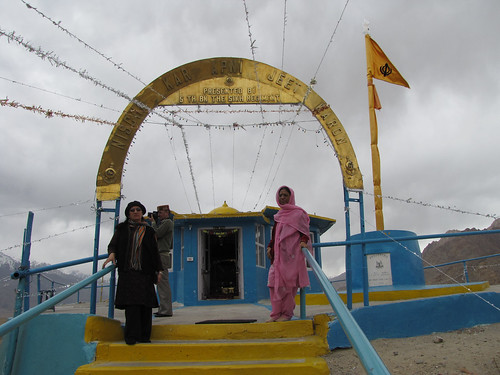 The construction of road by the army in 1965 it was seen as a  hurdle in making the road and wanted to remove it but this rock could not be moved , mean while the driver of bulldozer and Army Officer Commander of the team  dreamed of some one instructing them not to remove it from this place, upon knowing the story from the locals the Indian Army constructed a Gurudwara and till now it is managed by the Indian Army.