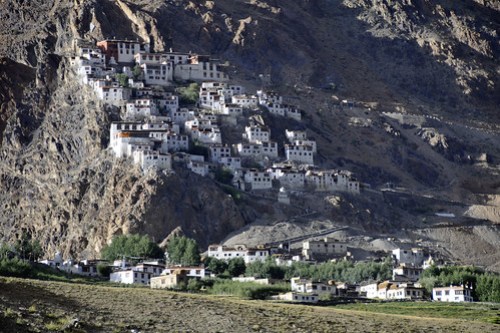 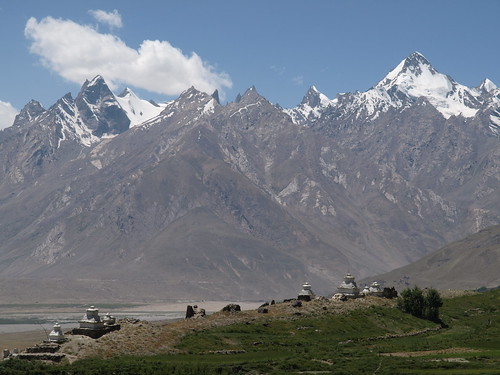 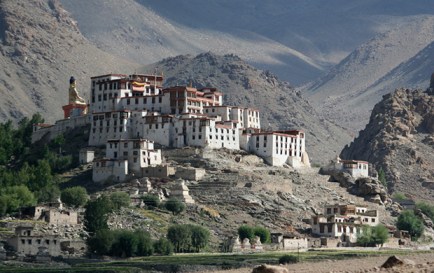 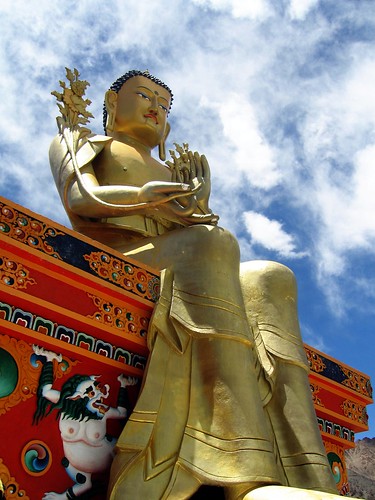 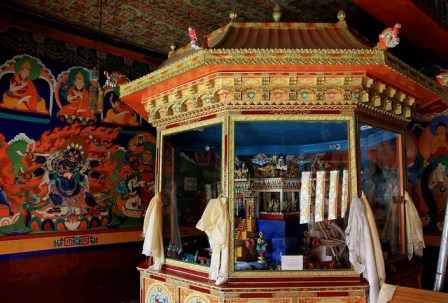 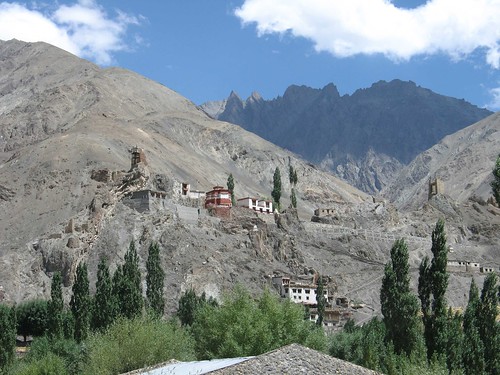 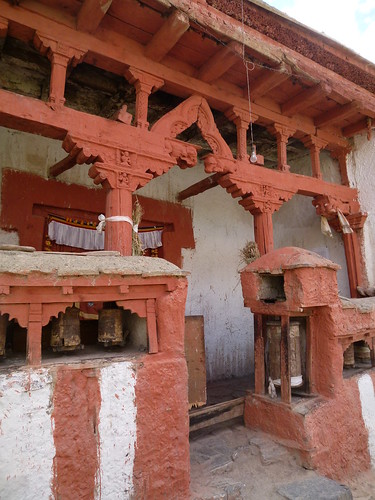 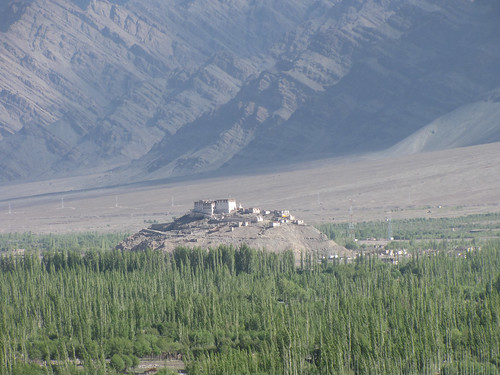 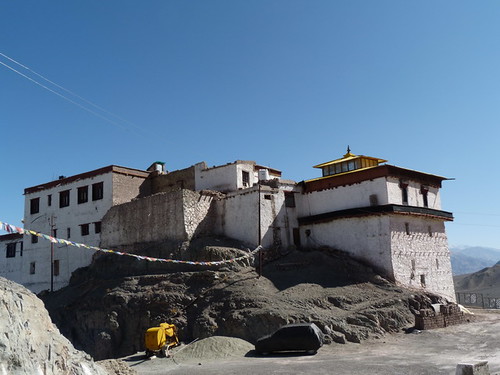 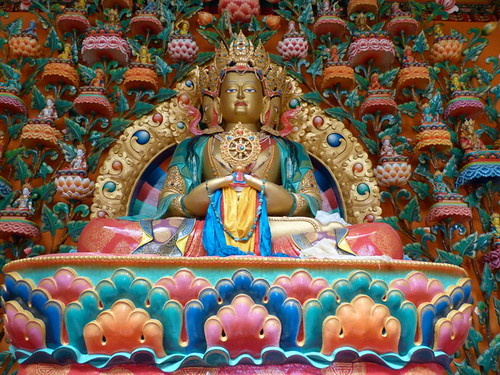 Thikse Gompa ( Monastery) is 19 km from Leh at an altitude 3600 meters from Sea , it is a Tibetan Buddhist Monastry establised in early 15th Centenary of Gelugpa School . It has a resemblance of Potala   Palace in Lahsa . It is a Twelve Story structure , built as a Fort Monastery it is the largest structure in Ladakh , its position is such that is gives excellent East and West view of Indus plains , Matho Gompa in the East, Royal Palace of Stok across the Indus and Shey Palace to the West have excellent views 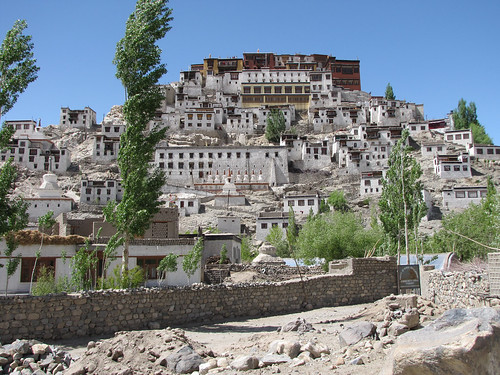 The main attraction is fifteen meter tall Maitreya Buddha statue largest in Ladakh besides Buddhist art stupas, Thangkas, wall paintings and arms.  Sherab Sangpo one of the Six disciples of  Tsongkhapa founder of Gelugpa school carried bone powder and drop of blood of his Guru Tsongkhpa and a small statue of  Amitayus as a gift for king of  Ladakh in early 15th Centenary in 1433 with the help from King a small monastery in a village of Stagmo, to the north of the Indus river was shifted to this place , legend is when Sangpo  after the prayers, offering kept in a plate  were taken away by two  crows, later it was found the offerings with plate were lying at a stone   in an undisturbed condition , it was taken as a divine directive to build a monastery here . Thikse became prominent second to Hemis Monastery in Ladakh . Around 1770 the Lama of Hanle dictated that the elder son will be the King of Ladakh while the younger brothers will serve as Lamas at Thikse and Spituk Monasteries 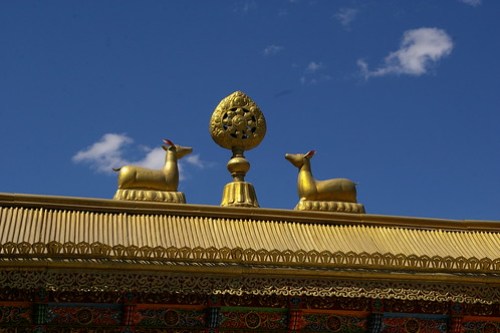 The main attractions are the Bhavachakra the wheal of Life  has insignia images of a snake, a bird and a pig that signify ignorance, attachment, and aversion . Next to this is the main assembly hall for prayers , a number of old manuscripts and hand painted collection of books along with 225 volumes of  Tangyur warped in silk are kept , it also have a Eleven headed Avalokitesvara with Padmasambhava . There are murals of Mahakal and Dukar  In the center of hall is a seat for His Holiness The Dalai Lama and on right is the seat of head of the monastery . 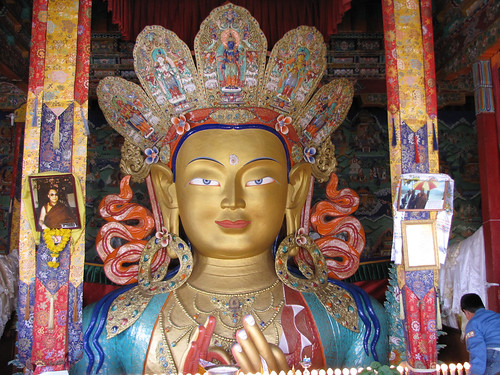 A temple dedicated to Tara with 21 images , a small shrine of protector  deity of Thikse the Cham-spring ,  an image of the Buddha with two of his disciples and the deity Yamantaka can be seen. In the courtyard murals of   Tsong Khapa, the Buddha , the Padmasambhava , Palden Lahmo and Mahakal are there.

Only men are allowed to enter the top floor of the monastery  the Lamokhang temple above the temple  local boys from the villages near by are students , among them few are chosen as Lamas , there is also an Nunnery  located within the precincts of the monastery  is managed by the Monastery Administration. In Ladakh, nunneries were held in a grossly inferior status ,  In the 1990s, awareness was raised on the status of the nuns  to ensure a shift in their functional role of servitude and to one of true spiritual practice the Chief Lama, Thiksey Rinpoche of this Monastery was  important in the positive developments in the betterment of nuns.

Gustor Ritual is celebrated every year from 17th to 19th day of Ninth month of Tibetan calander which falls in October/November . Scared Mask Dance or Cham Dance is performed as a part of the ritual . Morning prayers are followed by chanting of Buddhist sutras , people from far villages gather and meet the other villagers, a trade fair is also held where locals barter trade items .