Matha Kuar Shrine – by the side of the road is  a colossal statue of Buddha locally called Matha Kuar.  The statue measures 3.05 meter in height and this carved out one block of blue stone of Gaya region to represent Gautam  Buddha seated under the Bodhi Tree in a pose known as the Bhumsparsva Mudra   which symbolically expresses the supreme moment in the  Gautam’s  life just before his enlightenment to  become the Buddha , when He called upon the earth to bear witness to the pities performed by him in his previous birth. 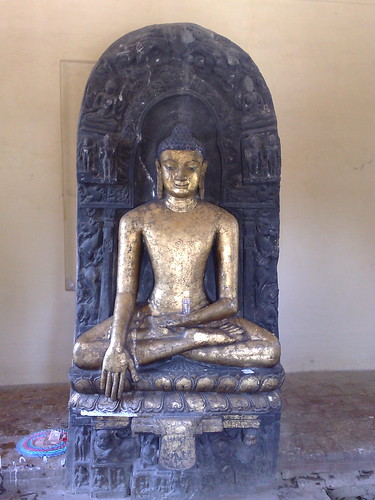 During Buddha’s lifetime, Kushinara ( Kushinagar), as it was then called, was a small town in the kingdom of the Mallas, surrounded by a thick forest cover. It remained forgotten until the late nineteenth century, when archaeologists rediscovered the site, and began excavations.

The inscription at the base of statue is dates back to the 10th or 11th Century A.D. The name of the Stupa implies the “dead prince”. The statue was found by the Archaeologist Carlleyle in late 1870s, as broken pieces, after the statue  being restored the temple was built by Myanmar pilgrims in 1927 to shelter the statue.

This place is  is also believed to be the one where Lord Buddha delivered his last sermon.