Rukmini Devi Temple is also known as Rukshmani Devi Temple situated just outside the Dwarka City in the North direction near the road leading to Bet Dwarka , its construction is of  12th Century with beautiful carvings on pillars and the dome.

It is located on the banks of Bhagirathi River, the Mandir comprises of a beautiful marble deity of Devi Rukmini, with four hands or Chaturbhuja. These four hands hold Shanka, Chakra, Gada and Padma, which symbolic of  her being reincarnation of Goddess Ma Lakshmi. 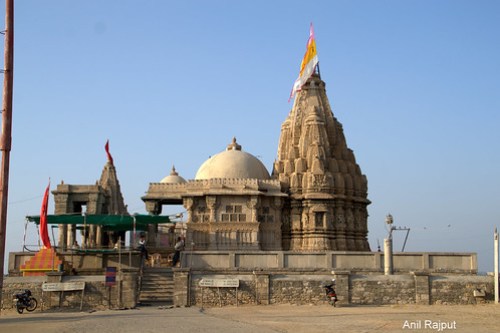 Rukmini was younger sister of Rukmi and daughter of King Bhishmaka of Vidharba , Rukmi was friend of lord Krishna’s uncle Kansa and never wanted his sister to have relation with Krishna, while coming out of temple Rukmini spotted Krishna and fled with him on his chariot , Krishna won the war with Rukmi and  wanted to kill him but Rukmini prayed to forgive him and Krishna let him go after shaving his head . Krishna had 16108 wife and  made Rukmini Patrani (the chief queen ), to celebrate their marriage they invited Sage Durvasa for a feast , Durvasa accepted the invitation on a condition to accompany them if Krishna and Rukmini will pull  his  chariot instead of bull or horses, on the way Rukmini felt thirsty and requested Krishna to fetch some water for her , Krishna hit the ground with his feet and Bhagirathi appeared at that place and escaping the eyes of Sage Durvasa , gave water to Rukmini to drink,  Durvasa saw this and got angry because he felt insulted being a guest he was to be fed first , he cursed that the Dwarka will not have sweet water , that the Krishna and Rukmini will not live together for 12 years .

The Rukmini temple is built outside the Dwarka at a place where lord Krishan gave water to Rukmini and had separation due to the curse of Sage Durvasa , away from Dwarka’s Jagat Mandir, even today the drinking for Dwarka is fetch from 100 kms. away  It is widely believed among the devotees that the pilgrimage is incomplete if a devotee doesn’t go to offer prayers at Rukmini Temple even if he worshiped the Lord at Dwarkadheesh temple. 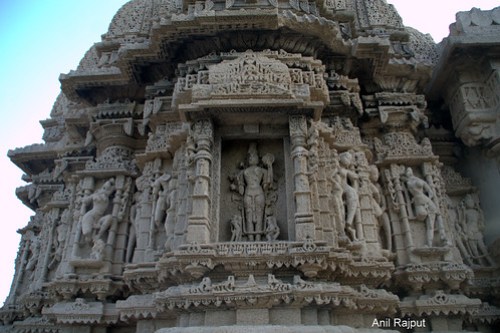