The Varaha Temple dedicated to the third incarnation of lord Vishnu built by the Chandela King Yashaovarman in around 900 to 950 AD Built on a lofty plinth a simple modest pavilion , pyramidal roof of receding tiers resting over fourteen pillars made of sand stone , located just opposite to the Lakshmana temple of Love  . 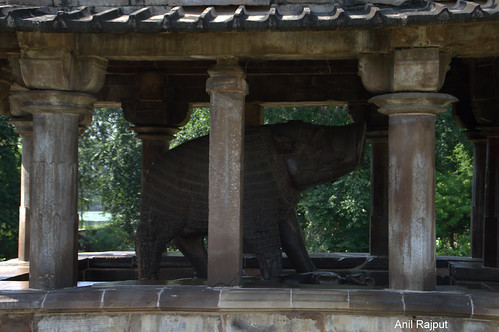 Varaha is the third Avatar ( Incarnation) of the Lord Vishnu, appeared  to defeat Hiranyaksha , a demon who had taken the Earth ( Prithvi ) and carried it to the bottom of  the cosmic ocean . The battle between Varaha and Hiranyaksha is believed to have lasted for a thousand years, which the Lord Vishnu  finally won. Varaha carried the Earth out of the cosmic ocean between his tusks and restored it to its place in the universe. Varaha incarnation of Lord Vishnu married Prithvi ( Bhudevi ) in this avatar. 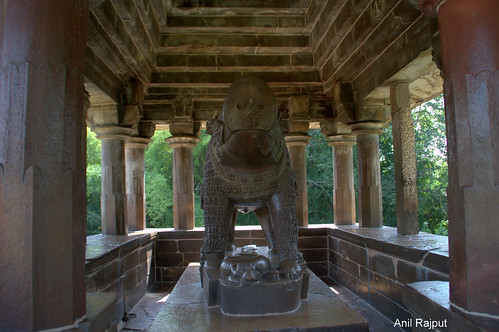 Varaha with Goddess Saraswati between mouth and nose with Veena , disfigured Bhudevi between the fore legs

The Varaha sculpture is colossal and monolithic and made of sandstone , the entire body 2.6 mtrs long and 1.7 mtrs. tall is covered with small images of Gods and Goddesses  in all there are  674 deities in 12 neatly carved rows symbolism to  the collective  power of these individuals  to the Lords Incarnation as Varaha to save the Bhudevi ( Prithvi ) the earth . 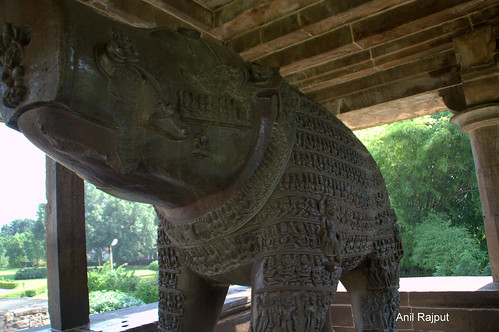 Goddess Sarasvati  playing Veena is carved between nose and mouth, Shesh Nag  (the Serpent ) is lying at the bottom between the legs, facing the Varaha a disfigured image of Bhudevi (The  Earth) can be seen sitting  below Seshnaga, the serpent is depicted in a devotional posture.