Lakshmana Temple of Love Khajuraho Madhya Pradesh dedicated to Lord Vaikuntha Vishnu,it is a Vaishnava  temple, built by the Chandela King Yashovarman . Inscriptions on a slab excavated here installed in the passage  confirms its construction during 900 AD to 950 AD. It is the first temple in the Eastern Group of Temples The UNESCO World Heritage Site 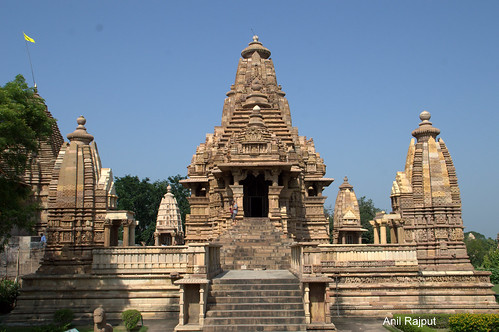 The Temple is raised in the center of a high rectangular  platform Jagati  with four small temples one on each corner hence called a Panchyatana Plan construction , the temple structure is built consisting of all the elements of a Hindu Temple Architecture , The Lakshman Temple stands like a giant mountain of stone at the center. The East facing temple , the porch has a pretty Toran or stone garland above the entrance leading to  the Mandapa  and then to the assembly area the Maha Mandapa , the main deity is installed in the Garbhagriha , the small area between the Mahamandapa and the Garbhagriha is the Antrayalya  , the devotees seek blessings standing in the Antrayalaya  . Its Shikhara ( the top) is clustered with small Urushringha . The main image Idol of Vaikantha Vishnu in the Garbahgriha  is with four arms and having three  faces , front is of a human , one side is Boar the third incarnation ( the Varaha) and the other side is of a Lion the forth incarnation of the Lord Vishnu ( the Narsinmha ). 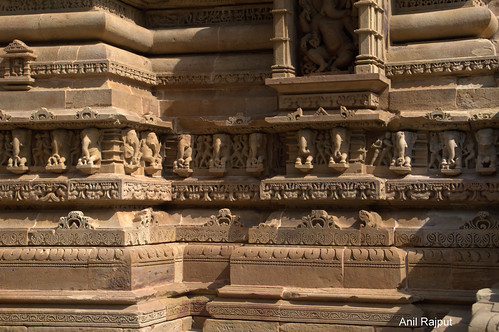 There is an abundance of sculptured masterpieces on its outer walls on the south side  the exterior temple wall is divided into several bands ,  the lowest  is the base of the temple , a row of elephants that peep out of the base as if they are carrying the weight of the stone on their stable shoulders, between the elephants are warriors protecting the temple ,  panel depicts a bearded Fire God( Agni Dev) beneath is the figure of the divine bridegroom walking in procession accompanied by musicians.  It is only here out of all the temples in Khajuraho the Camels are carved. 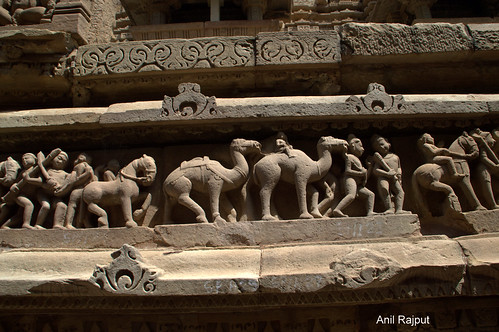 On the north side one of the elephant naughtily gazes at a couple making love . 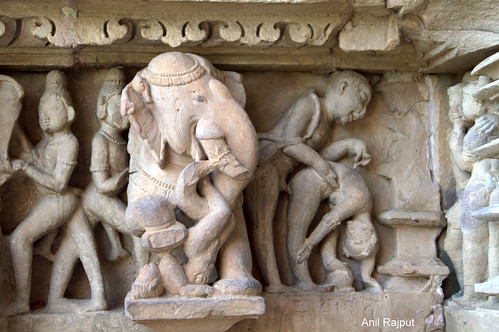 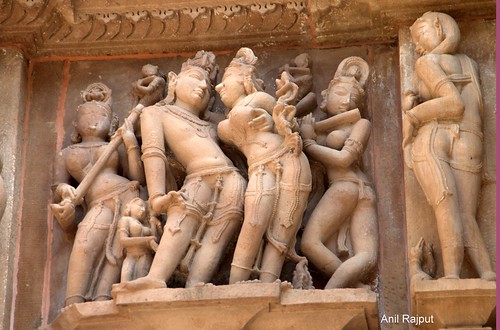 portrayals of women attired in traditional costume, flimsy fine textiles wound around the waist while the torso and arms and neck are adorned only in jewelry. There are ladies applying make-up, taking off their clothes, gazing into a mirror , a seductive woman scrubbing her arched back  an elegant young woman who has lifted up her foot  is being inspected by an attendant carrying a satchel.