The Namgyal Tsemo Gompa of Ladakh was founded by King Tashi Namgyal in the early 15th century, around the year 1430. This fort was once the royal residence of the Namgyal dynasty and is flanked by some temples built in veneration of the guardian deities , these temples are still standing today, unlike the fort which is almost in ruins , temples are visited everyday by a monk who opens the doors to light the butter-filled lamps every morning and evening in adoration of the deities. This is the time one can visit the Gompa. 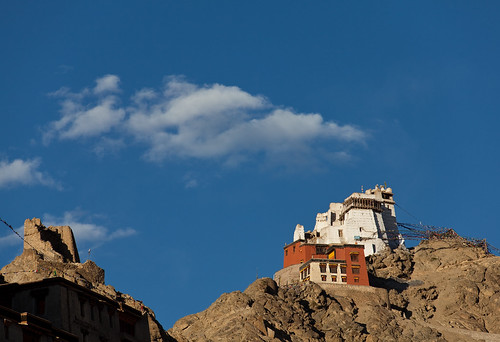 The palace also called Lechen Palkhar‘  is situated on a hill. Above the palace on the highest point of Namgyal hill stands the victory tower it was built to commemorate Ladakh’s victory over the Balti Kashmir armies in the early 16th century, Dards bodies are placed under the image of Mahakala, the guardian deity to stop further invasion of Dards. At the back of the fort there are remains of much older fort , according to locals it is a Dard Castle which was built much before the Tibetan rulers came to Ladakh.

It boasts of a rich collection of some ancient manuscripts and wall paintings. One of the most treasured possessions of the monastery is a three-story high solid gold idol of Maitrieya Buddha (future Buddha, also known as the laughing Buddha). Namgyal Tsemo Monastery of Leh, Ladakh also houses a statue of Avaloketesvara and Manjushri, approximately one story high. 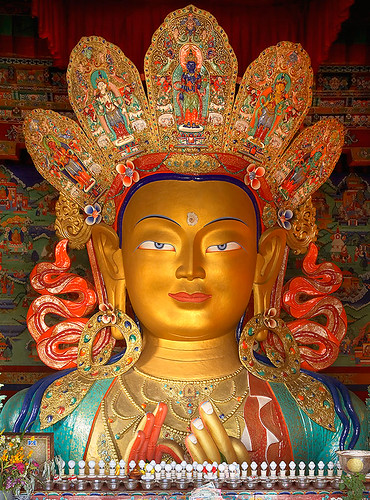 In the gloomy interior, one can just make out murals of “Shakyamuni” (the historical Buddha) and Tsongkha-pa, founder of the Gelug-pa sect. The veiled central deity itself sports a shiny phallus, believed to cure infertility in women. It also enshrines nearly 10 feet high of statues of Manjushri and Avaloketesvara. The  view of Leh city and valley from the top is worth spending time .