Phugtal Gompa , Monastery also called Phuktal a Tibetan buddhist monastery of the Gelupa Buddhist sect is situated in Zanskar valley of Ladakh at a height of 3850 meters , established by by Lama Gangsem Sherap Sampo in the early 12th century, the monastery is a unique construction the foundation of the monastery, made up of twigs and muds built into the cliffside , on the mouth of a cave on the cliff face  onto an almost perpendicular drop. When entering the gorge (on foot, no road) one turns round a bend in the valley and are presented with the view over a  gorge of a major tributary of the Lungnak (Lingti-Tsarap) River on its right bank .

Phuktal meaning through caves, It is a 2-storied structure painted in traditional Ladakhi colors of red, black and yellow, the highlights of the monastery include frescoes and ceiling decorations in an old Gompa which belong to same era as that of Alchi Monastery. There are  three large and one small prayer room and a library. One of the main attraction here is a hollow in the rock in the cave over the monastery, the level of water in this hollow never drops down  despite any amount of water being drawn from it , this water is believed to have curative powers. 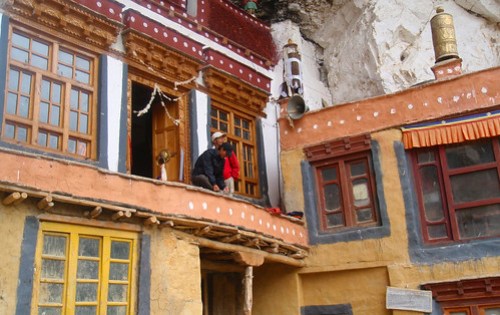 One can reach here from Kargil to Padum by road and then a two days trek route that leads to Manali diverges off from the Purney Bridge leads  to a 7 km trek to Phuktal monastery.

The monks of the monastery carry out the sacred Cham dance during the Gustor festival which is celebrated during the 18th and 19th day of the Tibetan 12th month.