We all gathered at Dehradun on a hot summer day, but comparatively cooler than Delhi. Stayed night at Hotel Pacific which is one of the best in this city. It was a nice Chinese dinner after a long time , we had to retire early as next day we were to be at helipad early in the morning. 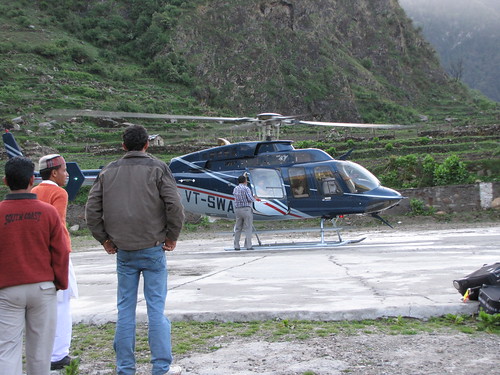 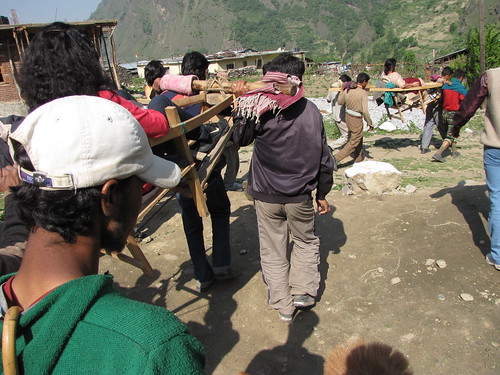 Senior Citizen pilgrims in Doli/palki from Kharsali helipad to Yamunotri

It was a nice day with a pleasant weather at helipad but little haze in the mountains. With lots of excitement we took off at 0800 hr. from Sahastradhara helipad for Kharsali , hovering over the green steps fields , small villages here and there.  In about 40 minutes we were at Kharsali helipad, recevied by our local representative Mr. Rajpal Rana, he lives next to the helipad and owns a peice land around and Janki Chatti it is on the left bank of River Yamuna approach is through a dirt road, the old bridge is closed as main road collasped and not yet repaired, a parallel small hanging bridge is being used to cross the river. 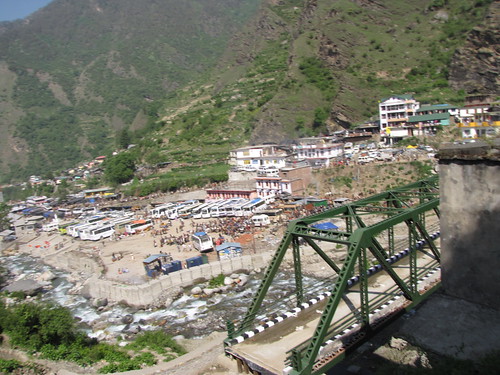 When local people cross the river they pay their respect by bowing their head to the river. We had to hire the Palki or Doli, a light wodden chair carried by four men on their shoulders  from the helipad I hired a mule for 6 km a steep climb of 800 meters from Janki Chatti  to Yamunotri trek which is on the right bank of river it is narrow at many places the passage is cut through the rocks one is to take care of head due to low height of passage there are many tea and cold juice vendors, on the way people from all age groups walking and chanting “Jai Yamuna Maiya Ki” 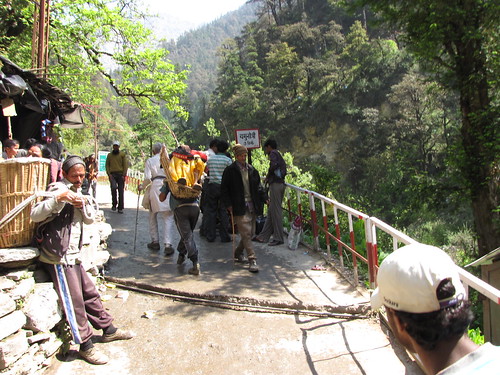 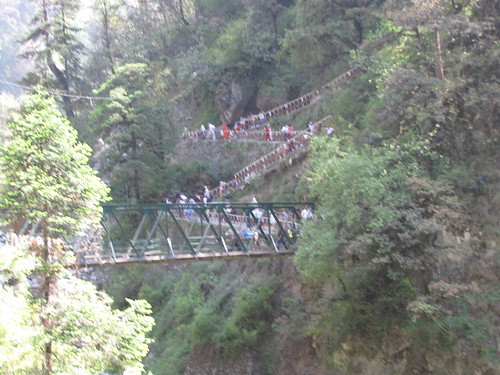 Steep climb treak from Janki Chatti to Yamunotri after the bridge

I could see the faith on their faces in spite of tiredness due to difficult  climb , it took us about 2 hr to reach the main shrine the temple of Maa Yamunotri River which is on the left bank of stream comming down from the Kalind mountain the Champasar Glacier. This temple is tall  pyramid style structure painted yellow a strong contrast with surrounding, we performd the puja at Tapt Shila  which is just over a hot water spring the floor where we performed the puja was of white marble stone we could sit comfortable on warm surface had a darshan of Yamuna Maa in the temple after the puja , the water at hot water spring was boiling hot and pilgrims were cooking rice tied in a cloth  dipping it in the hot water, there is one more hot water spring whose water is less hot and pilgrims were taking bath before coming in for the puja at Tapt Shila. 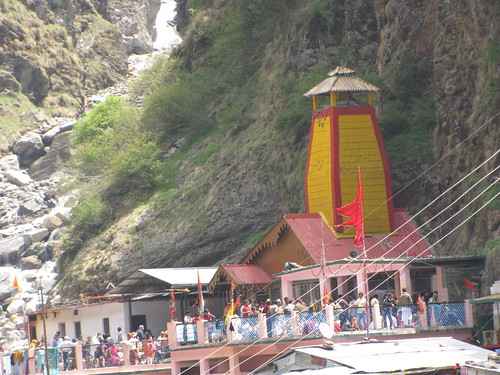 Yamuna decending down from Kalind mountain and Yamunotri Temple 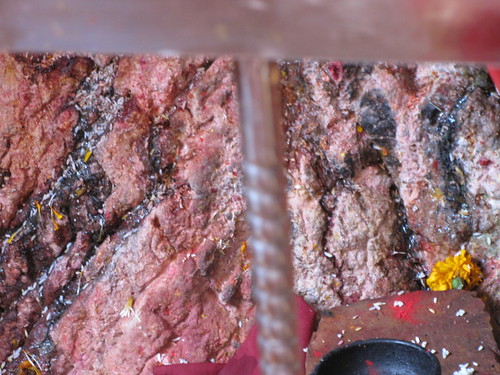 Soon after we started our journey back to Janki Chatti to take our chopper flight to Gangotri , on our way back mid way it started drizzling which is quite unpredictable, by the time we reached the helipad it started to pour we took shelter at Raj Singh’s house next to the helipad  there I got a call from the control room that  Choppers are stuck up in bad weather at Phata and Dehradun  there is no chance we were to be picked up from Kharsali for our onward destination  Harsil helipad , it started raining heavily  at Janki Chatti  Promark Travel representative Raj Singh arranged for two rooms with western toilets  Raj Singh also arranged the Doli for the us  transported from helipad to the guest house as it was pouring and the dirt road became slippery with out light it bacame more dangrous but the passage from Janki Chatti to Yamunotry we were told is always illuminated with high-powered lamps.

We spent our night in a small guest house called Modi Bhavan owned by one of the priest at Yamunotri temple , had our dinner just opposite the guest house it was pouring and cold but we enjoyed our hot simple dinner in candle light as there was no power but the trek to Yamunotri was well illuminated after the dinner we decided for next day to fly for Kedarnath instead of Gangotri if time allows we may do it after the Badrinath visit, I informed the headquarters about the change I was told the chopper will be there  at 0600 hr. to pick us up , it poured the whole night but early morning the chirping of birds assured me of clear weather before I could look out from the window.

We had a hot water in buckets for bath got ready, our porters were waiting for us they loaded the luggage and picked up the three dolis while I prefered to walk up to the helipad , Captain Ahluwalia was in time entered the valley and landed at the helipad he didn’t  switched off the engine and got us in the cabin and took off , we had a nice clear view of Bander Punch mountains and flew over the Tehri Dam on the way we were informed that there is no parking place at Badrinath helipad we may have to either wait at Gauchar or Phata helipad . 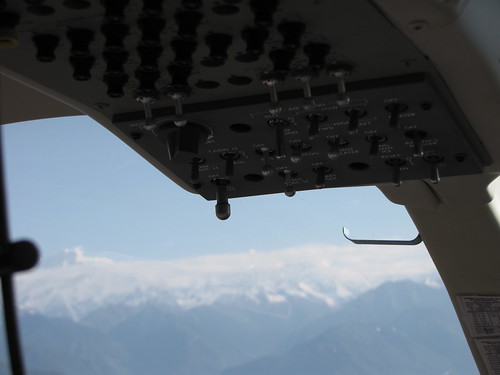 View of Bander Punch from the helicopter cockpit 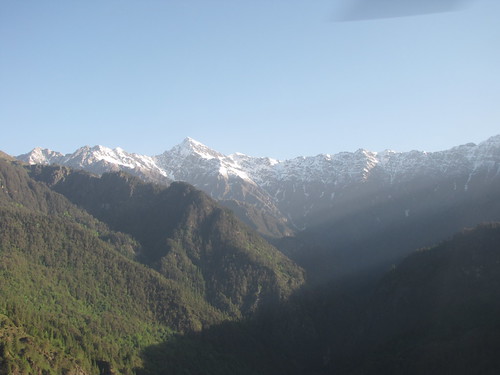 We landed at Phata where we changed the helicopter and took off to Badrinath after getting the clearance it took about an hour to reach there on the way had a beautiful view of Nanda Devi peak, Hathi Ghora Palki , Chukhamba peak , flew pass the beautiful entrance to the Valley of Flowers. 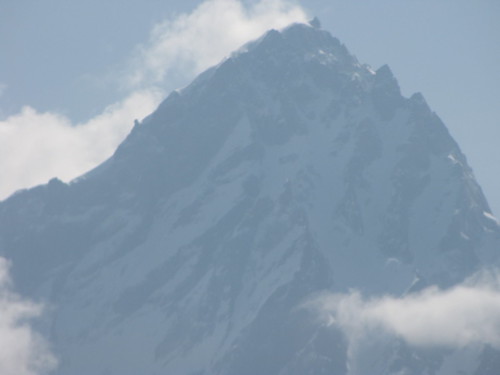 Before landing at helipad the chopper took a circle of the Sri Badrinath temple the bright blue, red and golden painted entrance  more typical of a Buddhist temple is a contrast to the surrounding , it was clear sky but at a height 3133 meters from sea level and surrounded by Nar and Narayan peaks with Neelkanth peak in the back it was cold and windy out here our local representative Vineet was there to pick us up in a car to the main shrine which is about a kilometer from the helipad , passing through the shops and restaurants we crossed the bridge over the river Alaknanda. 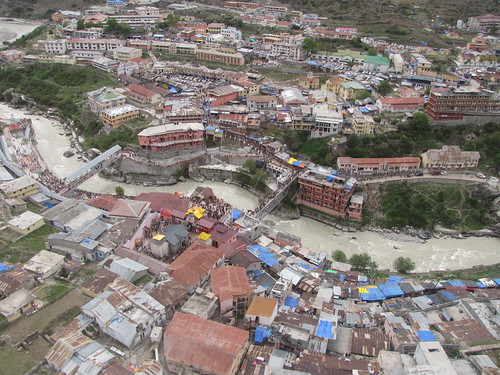 Ariel View of Sri Badrinath temple on banks of Alaknanda

On the right bank of river is the Brham Kapal and the two hot water springs the Tapt kund where before entering the temple pilgrims take bath, we had the arrangements for a priority darshan which is with a fee paid to the shrine board , within few minutes we were allowed to enter the temple seated in the enclosed just opposite the main black stone statue of lord Badri Vishal representing lord Vishnu seated in a meditative pose along with Garuda and Godess Mahalaxmi, a ten minutes  puja with Sanskrit shlokas was performed by the priest who offered us the Prasad and the green Tulsi leaves garland of lord Badri Vishal as blessings, my heart was full of gratitude we came out in the market and informed Capt Ahluwalia to pick us up for our onward journey. 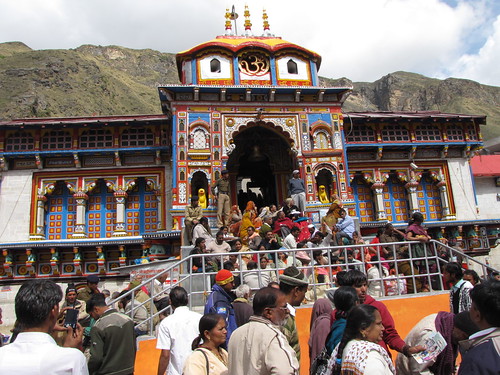 The main entrance to the Sri Badrinath Temple

We waited for about an hour at helipad finally sighted the chopper entering the valley it landed and we boarded the chopper within two minutes without switching off the rotors again we took off for a 45 minutes flight to Phata , we had to change to a six seat chopper for Kedarnath , it took off and within minutes we were in a narrow valley flying over the river Mandakini I can never forget this 15 minute  flight as it gave me a feeling of a 3D movie show . 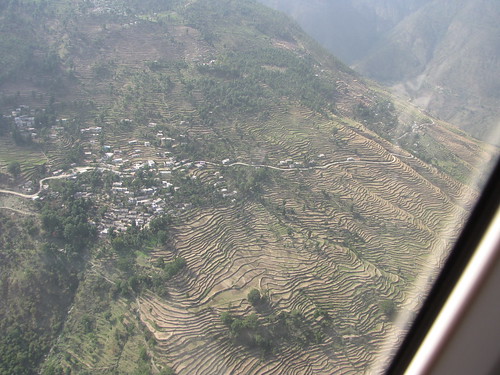 Entering the narrow valley from Phata to Kedarnath flight over Mandakini 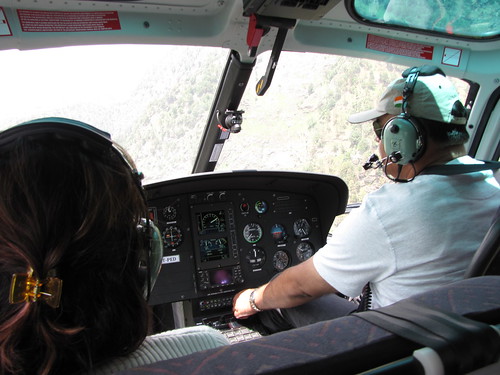 Flying in the narrow valley to Sri Kedarnath

We landed at the height of 3384 meters from sea level helipad and wanted to walk up to the shrine but one of the lady felt breathless due to thin oxygen we waited and hired two porters to carry the old ladies on their back for a distance of  800 meters , we showed the priority darshan slip to the office just next to the main temple  were escorted by a  priest,  lots of pilgrims were inside and it was almost free for all with no control over the crowd , facing the  main entrance is the big statue of the Nandi the bull , the main temple is made of big blocks of stone and one wonders as to how without facilities this construction job would have been done without using any kind of mortar to grip the stones together 1000 years ago . we entered the first room where there are statues of the five Pandavas brothers and the Dropdi ,after crossing the narrow door with stone foot steps  in the Garbh Griha is the main Sadashivam lord Shiva in a form of conical rock is worshiped , we sat there for a while performed puja I offered almonds which I had carried with me from Delhi , came out and took a  parikarma of temple , there were lots of sadhus devoties of lord Shiva each one a unique in appearance bare foot nominal or no cloths on body , the weather was clear and warm but with chill in the air the small dhabahs serving pakoras and samaosa tempted us to have it with tea while waiting at helipad , we took off and flew back to Phata where our chopper was waiting for us, we inquired from the captain if he can take us to Gangotri , he informed that it was not the right time as the weather can change any time in the afternoon there . 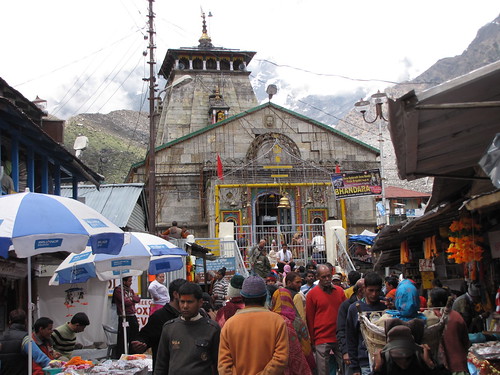 We decided to return to Sahastradhara / Dehradun flying over the Rudra Pryag, Karan Pryag , Srinagar watching the confluences of rivers Alakhnanda and Bhagirathi  to form river Ganga finally at Dev Prayag , at Rishikesh an hours flight we turned right  in the direction of Dehradun leaving behind the river Ma Ganga  landed at Shastrdhara helipad , we had to wait for some time for our car to pick us up to our hotel as roads were blocked due to felling of trees on the previous days hail storm, we had a nice diner at hotel slept with fond memories of a life time wish fulfilled.