Teli Ka Mandir or Telang Mandir was built in 8th Century during the period of King Mihir Bhoj  .The structure of the temple presents a perfect fusion of the Northern and Southern architectural styles of India. The ‘Shikhar’ (spire) of the temple is  Dravidian in its style, whereas the ornamentation is done in the Nagara style (specific to North India). Teli Ka mandir  doesn’t have any ‘Mandap’ or pillared hall. The temple comprises a Garbha Griha  a porch and a doorway. 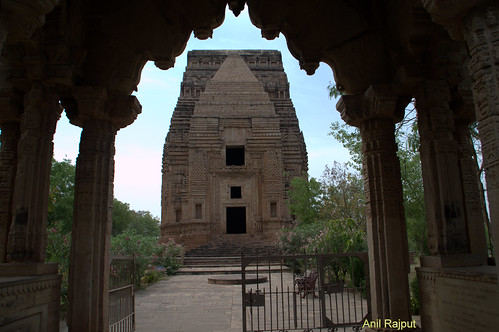 Teli Ka Mandir is 100 feet  the tallest and most stunning temple in the  Gwalior Fort. The temple is actually dedicated to Lord Vishnu in the form of his mount, Garuda. A  honeycomb design with a series of receding pointed arches within an arch. The entrance door has a Toran or archway with  images of river goddesses Yamuna and Ganga, romantic couples, foliation decoration and a Garuda . Diamond and lotus designs are seen on the horizontal band at the top of the arch 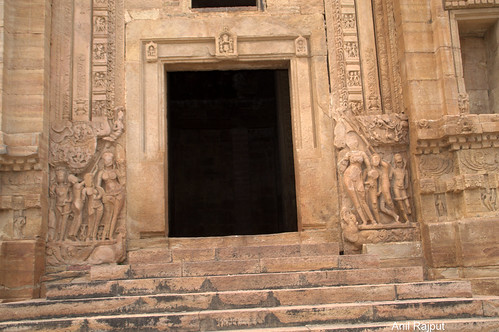 Within the rectangular structure is a shrine with no pillared pavilions   with a Barrel Vaulted or  Valabhi roof 25 meters (82 ft) in height. Figures of amorous couples, coiled serpents, on the doorway one can see the ladies from a royal family sailing in a decorated  boat , one  of the maid having an umbrella for shade , above it are coiled snakes   .  At the  The central position on the doorway is dominated by the figure of flying Garuda. 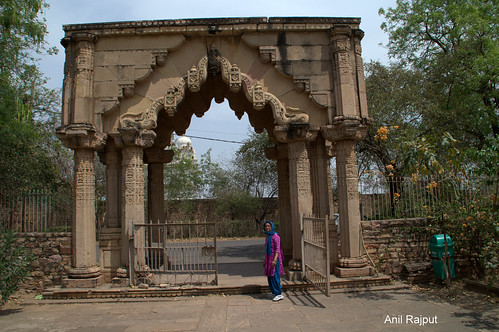 There are legends about the name of this temple . One says  it was made from donation of a Oil merchant who locally called Teli, given its name Teli’s Temple. The other story says as it was built form princes from Telengana (region in South India) it is called Teli Ka Mandir. One more  story says, “Teli Ka Mandir” term came as this Rajput Temple according to some legends, Rashtrakuta Govinda III conquered the Fort in 794 AD . He then handled the rites of religious ceremonies and rituals to Telang Brahmins , it seems to be true because of its fusion of Indo Aryan and Dravidian architecture from the Telangana region .