Sani Gompa Monastery of Ladakh also known as Turtot Gyat situated on the road to Kargil, at a distance of approximately 6 km to the west of Padum. belongs to the Drukpa Kagyupa School,  it is believed that the monastery was associated with Kanishka, Kushan ruler of 2nd century AD because of  the Kanika Stupa in the back yard and construction like a fort,  the gompa is not built on a hill or mountain but on flat land. It is in the form of a castle and the Kanishka chorten is in the backyard of the enclosing stone walls with chortens mounted at intervals. Next to the Kanishka chorten are ten standing stones with engravings of deities in a pre-Tibetan style.  The entire Sani Monastery of Ladakh has been constructed in parts, each dating back to a different century. The chorten inside the oldest part of Sani Monastery is believed to be erected in the 2nd century AD. On the other hand, the Dukhang (assembly hall) of the monastery is said to be constructed in the early 17th century. 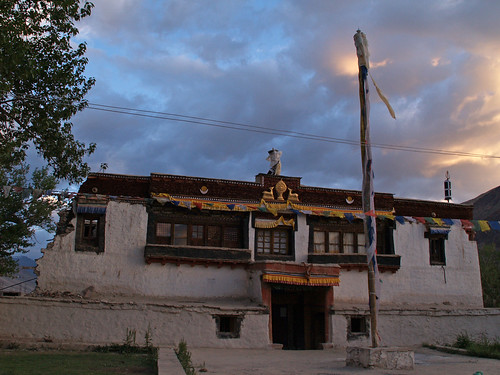 the famous Indian Yogi Naropa. It is believed that the Yogi meditated under the Kanishka Stupa, situated in the backyard of the monastery. The same spot, where the Yogi sat in meditation, now houses a small room with a veiled bronze statue of the Yogi. It is on displayed on the eve of the Naro-Nasjal Festival every year in late July  or  in the first week of August, between the 15th and the 20th of the sixth Tibetan month. It takes place during the blooming of the  Guru Neropa Flower, the Lamas from Bardan Monastery perform masked dances as ritual offering. a magnificent plantation of huge old poplars adjoining the gompa is unusual as this region is mostly treeless 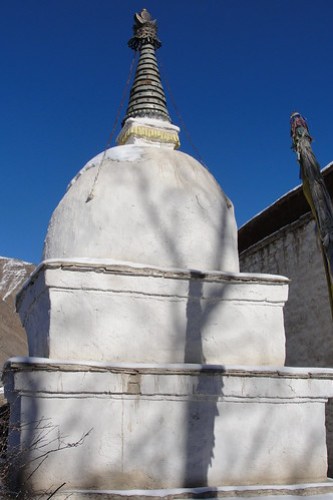 Stupa at Sani Gompa back yard

The Dukhang (assembly hall) of the monastery is said to be constructed in the early 17th century. The central praying hall is situated in the main building of the monastery and stands ornamented with a rich collection of the statues of popular Buddhist divinities and Kargud-pa high lamas ,the walls of the praying hall are decorated with frescoes and Thangkas. The Assembly Hall or Dukhang has 16 columns and houses images of Chamba, Chenren and Padmasambhava as well as others. Behind the altar is the Gongkhang, a small room containing an ancient figure of Cho Rinpoche

This place is also among the  eight most important cremation grounds of Tibetan Buddhists is outside the monastery complex and the cemetery is ringed with ancient rock-carvings which show Indian influences there is also a  two metre high boulder with a painting of Maitrya on it  the pilgrims pour the sacrificial oil over it .

Drukpa  Kargyu school  is the only one of this order in Zanskar which has nuns, A group of Kargyu nuns established a small retreat centre at Starkhugnza in the 1990s ,  It is a site above Sani which was founded by Ngawang Tsering (1657-1732), a famous Zanskar meditator.

Every year in the winters a Great Prayer Festival is held in which the  firewood provided by villagers of the surrounding villages in which prayers from the Tibetan holy books are chanted.