Nubra valley situated 150 km from Leh at an altitude of 10,000 feet above sea level . It was also known as Ldumra ( Valley of Flowers) ,  Shyok river and Siachan river flows through a high altitude desert to form a large valley there is no rain fall,  rare precipitation but land is fertile near the river beds and produce Wheat, Barley, Peas, Mustard , a variety of fruits and nuts, including Apple, Walnut, Apricot and  Almond . Nubra Valley is also called the Food Bowl of Ladakh 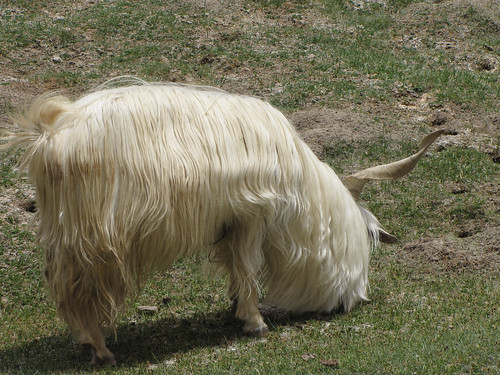 The people are of Balti origin, by faith  majority of them are Buddhist with few Muslims , Karakoram pass connects with Xinjiang region of Tibet China in the northwest of valley , in the north is Siachin Glacier , people live here are fair complexion with blue eyes , different from Ladakhi features who are with Mongolian features. It is said they belong to a Greek Tribe who came in search of Jesus Christ tomb never returned and settled here.

In India the Bactrian , the double hump camel is seen in the  deserts between Hundar and Diskit , it is pride of Nubra valley 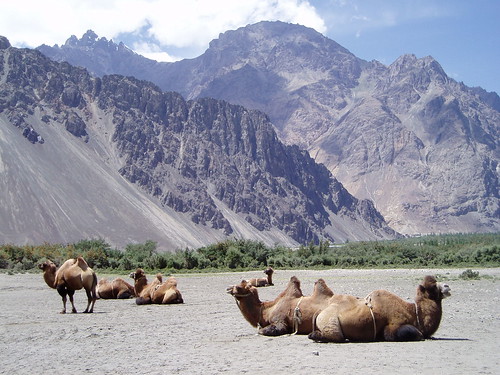 To reach Nubra from Leh one is to drive on worlds highest motorable road and cross the Khardong-La pass , travel to Nubra need a permit, which only allows travel as far as Hunder and Panamik for a maximum of seven days. Tourists are to hand over photocopies of  permit on both sides of the Khardung – La and also by the bridge to Sumur. Khardung La is one of the highest motorable passes in the world joining Indus Valley (Leh) and Nubra Valley and Shoyok Valley. Built in 1976 by Indian Army and Border Road Organization 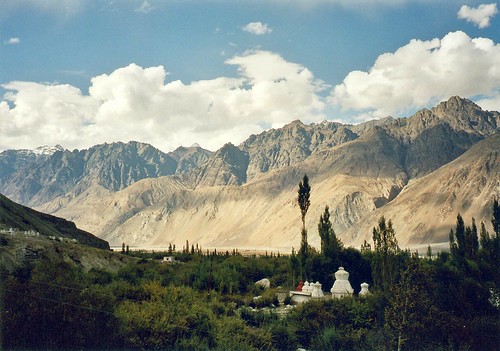 Panamik is the last village accessible to foreigners.village is famous for 250 year old Ensa Gompa and hot water springs. Just few kilometers from here starts Siachen Glacier, the highest battlefield in the world .

Diskit Monastery,  the oldest and largest Buddhist monastery of  Gelugpa tradition of Tibetan Buddhism in Nubra . It  was built in 1420AD, on top of a hill overlooking town of Diskit, the Gompa provides beautiful panoramic views.  to reach the Gompa one is to climb a half hour trek through a two meter wide steep path . The main attraction of the Gompa is the main Deity, which holds in its hand the mummified human forearm and head, which is believed to be of a Mongol warrior .