Stok Palace was built in 17th centenary by King Sengge Namgyal but after some time Royal family shifted to Shey Palace which was constructed in 1655 . When the Dogras army under Zorawar Singh of Jammu invaded Ladakh in 1842, the Namgyals shifted back to Stock across the Indus river  and made it their permanent residence. 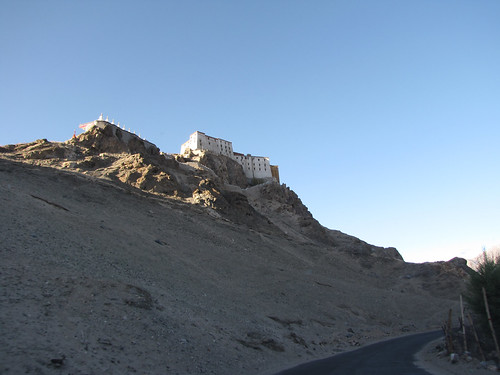 It is located at 14 km from Leh across the  Choglamsar bridge on river Indus.

The Royal Palace is a four-story structure , sporting a mix of ancient and modern architectural style,  on top floors are the Royal family residence , the lower floors which were used as stables and stores are now converted into a museum having rich collections of royal jewels, an 8 prong engagement ring, ornaments, ceremonial dresses , crowns and centuries-old pieces of royal jewellery. Sooth paintings which are more than 450 years old paints prepared by crushed and powdered Gems and stones , the brightness of colors give a look of a new ,  the ancient headdresses still worn on important occasions , thought to have originated in Tibet, are encrusted with slabs of flawless turquoise, polished coral, lapis lazuli and nuggets of pure gold interesting collection of Buddhist art, weaponry, coins, seals, antique ritual objects are at display. The best display is the knotted swords , legend is once someone questioned the credentials of the Royal Oracle in the presence of the King , to display his supernatural powers he pulled out the sword of the King and tied a knot with it . 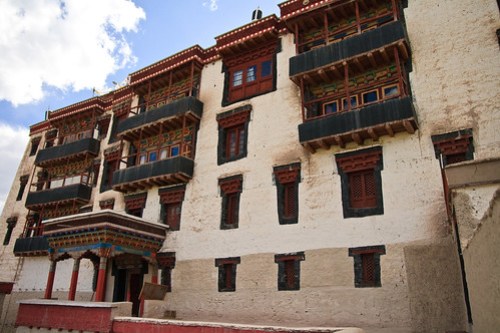 The location of Stok palace is gives excellent views of Stok – Kangri mountains in Zanskar range to the south across the Indus River and Ladakh range is in the south behind the palace. The Stok Palace is the best place to view sunrise and sunset from its roof top.

The Stok Kangri and Markha valley treks starts from here .

Hemis Gompa in Hemis town 40 km from Leh city , it is a famous monastery founded by King Senge Nampar Gyalva  in 1672 AD , every year in the month of July a colorful festival is held in the compound attended by not only the locals but people from all over the world. Hemis gompa is also believed to have been established in 1630 by Lama Tagstang Raspa and built by Palden Sara under the patronage of King Sengge Namgyal on a site previously sanctified by the construction of a cave hermitage dating from the 12th century. This monastery is the oldest one in the area belonging to the Kargyu school . 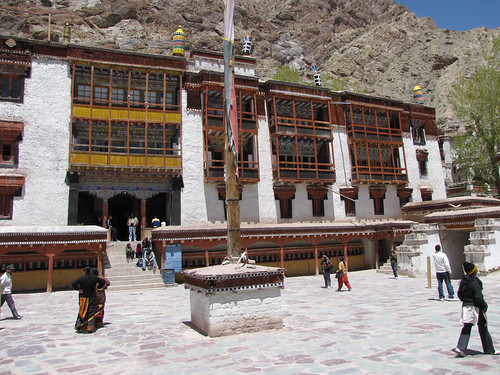 This two-day festival depicts a dance-homage to the birth anniversary of Lord Padmasambhava or Guru Rinpoche. The festival is the largest and biggest of the Tibetan Buddhist Gompa festivals in Ladakh. It is celebrated across three days from the 9th to the 11th day of the fifth month of the lunar Tibetan calendar, vibrant and endless dances are accompanied by discordant sounds of cymbals, large-pan drums, small trumpets and large  size wind instruments . The lamas  get transformed into demons and gods , bang on drums and crash symbols together as others gyrate and leap to fight off demons. 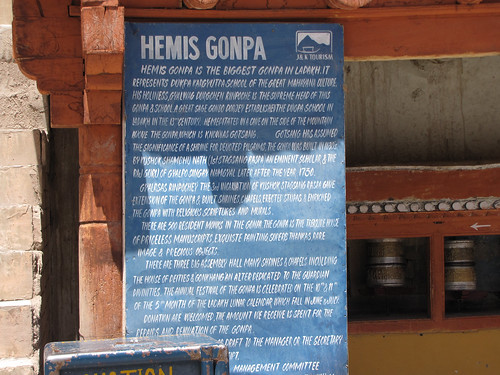 The predominantly practiced religion in Ladakh is the Mahayana Buddhism. Mahayana Buddhism is based on the eighth tenet of the concept of the eight fold part as propagated by Lord Buddha. This form of Buddhism stresses on meditation and concentration. One of the most innovative concepts introduced by the Mahayanists is that of the bodhisattvas.

As one enters the courtyard, to the right are two large temples up small flight of stone steps. The fronts have a wooden verandah of Kashmiri style, rising two storeys. As one faces them, the temple on the left is the Tshogs-khang and on the right is the Dukhang. The Dukhang contains the throne of the Rimpoche and seating areas for the lamas.  Tall wooden pillars rise in the center to a square cupola with windows that supply light to the throne. The walls also have paintings of Sakyamuni (the Historical Buddha) with the blue hair, other Buddha figures and paintings of Tantric deities such as Hevajra and Samvara. In the Tshogs-khang is a large gilded statue of the Sakyamuni Buddha with blue hair surrounded by several silver chortens decorated with semi-precious stones. In front of the Buddha is a throne made of painted and lacquered wood, a present from the former Maharaja of Kashmir to a former Incarnate Lama of Hemis 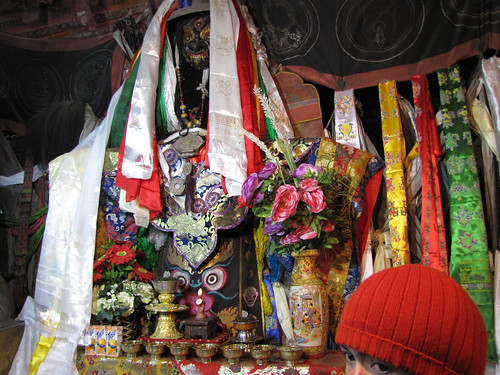 Pehar Gyalpo, revered as the protective deity of Hemis. It is said that Pehar was once the lord protector of Sam-Yas monastery and a monk from there by hiding the spirit of this deity inside a cymbal had brought it to Hemis. Each day sacred rituals are performed to evoke Pehar’s blessings.