Karnaprayag on way to Sri Kedarnath

Karnaprayag is one of the five holy Prayags  with Alaknanda in Himalayas which all together forms the holy river Ganga , situated at 172 km from Rishikesh at a height of 1451 meters from sea level , it is a Prayag  (confluence ) river Alakhnanda with river Pindar which originates from Pindari glacier in Kumaon region of Uttrakhand . This place is surrounded by the Peaks Nanda Devi ( 7816 meters) , Trishul , Dron Giri , Narad Ghunti , Migathuni and Maikotli , 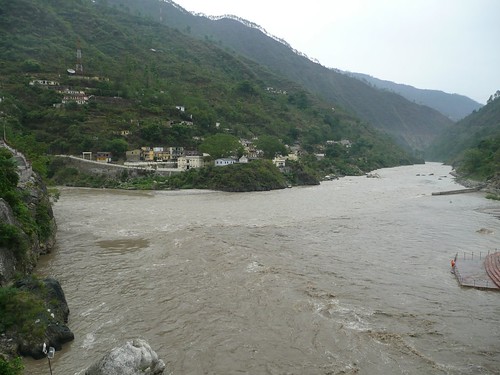 The temple here is dedicated to Uma and Karna , this temple holds high importance and respect among the local people . The legend is, the name of this place is after the name of Karna from the epic Mahabharata, friend of Duryodhana , son of Kunti who is also mother of five Pandva brothers, Karna who is son of Sun God The Surya  performed his prayers for three years after this he was rewarded a impregnable shield to protect himself, he became unmatched  warrior in the battle field, he was cremated here by Lord Krishna after he was killed in the battle fields of Mahabharat at Kurukshetra .

It is also a place where King Dushyant met Shakuntla, had courtship and she gave birth to Bharat on his name our country is named Bharat,  Abhijanana Shakuntalm play written in Sanskrit  by poet Kalidas in 1st centuary in the period of King Vikramaditya of Ujjain  is based on this legend

Nauti village  is the maternal place of Nanda Devi , It is said that for the past Five Thousand years every twelve years a Nanda Raj Jat Yatra is performed it is the longest and most strenuous pilgrimages done on foot , the male members of Garhwal royal families and Chand Garhi village visits the Nauti village to worship the SRI YANTRA  in a tantrik rites and rituals to invite the sprits of Godess Nanda into the Gold Idol from her husband’s abode  the Himalaya , very strange but true a four horned male sheep is born every time in this period  is given in the custody of royal family to be fed and taken well care of along with the other preparations to perform a 22 days long journey and to leave this Sheep in the Himalayas in Nanda Devi area passing through the age-old legendary Himalayan trek that has so much of traditional religious significance. The beauty of the trek is a picture perfect fusion of high mountain valleys, lakes, streams, glaciers and luminous dense green forests and it is a veritable paradise for trekkers. The Nanda Raj Jat Yatra is a spectacular festival.

Karn Prayag is also a base for Roop Kund and Pindari Glaciers trek.

Swami Vivekanand along with  Guru Turianand ji and Akharanand Ji  meditated here for eighteen days in 1890 when he was wandering and meditating at different places from 1888 till 1893 .

Harsiddhi Mata or Harshad Mata temple is situated in a village Miyani about 3 km from the Dwarka – Porbandar- Somnath highway about 65 Km. from Dwarka , 30 km before Porbandar and  aprox . 170 Km. from Somnath on a hilltop overlooking the Arabian Sea .

One is to climb 400 steps to reach the temple which was established by Lord Krishna for his Kul – Devi  at present no puja is performed here , the Puja is performed in a temple built at the foot hill in the market . 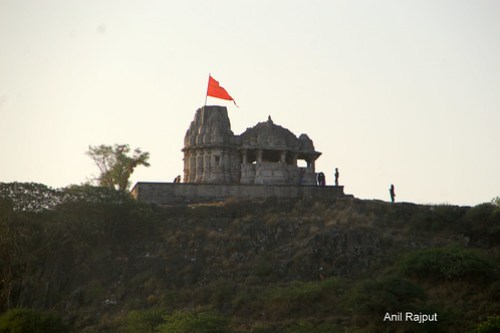 The hill on which the temple is located is called Koylo Dungar , the legend is Lord Krishna prayed to Mata Amba Ji to give more powers to kill the Jarasandh and the other demons , after his success in war Lord Krishna built this temple himself and celebrated the victory with his Yadav community , since then Yadav community worship Harsiddhi Mata as their Kul- Devi. 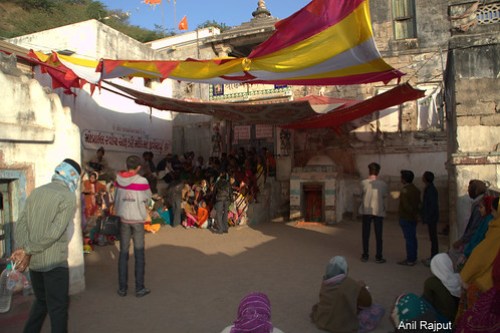 Harsiddhi Mata temple at foot hill in the market

Around 1300 AD a Jain merchant Jagdu Shah visited the temple and prayed to the Harsiddhi  Mata to save his ships which were sinking when ever  they were crossing the sea near the temple, he constructed the new temple and requested the Mata to come down and stay at the foot of the hill , since then Harsiddhi Mata is Kul Devi for many Jain families  and puja is performed .

The Sri Yantra and right colours

King Vikramaditya of Ujjain also a devotee of Harsiddhi Mata  built one temple at Ujjain , visited at this place and said that he will worship her every day and requested that the day time she will stay at Ujjain and at night in Miyani. A Sri yantra is carved in the temple. Mata is also known as Vahanvati Mata ,  She is also known as Sindhoi Mata or Goddess of Sands . 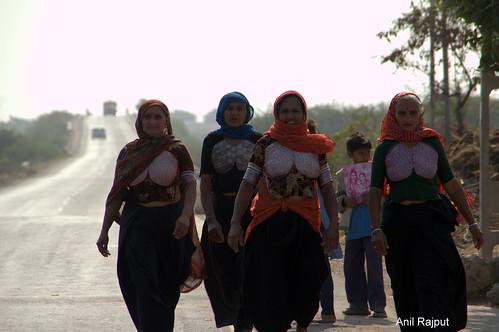