Lamayuru is one of the largest and oldest gompa in Ladakh, situated in Kargil district on Srinagar- Leh highway at a height of 3510 meters,127 km from Leh about 15 Km from Fotu-La, it was originally the Bonpo Monastery   called gYung-drung Monastery, a Swastika symbol and  gYung drung bon  is the name of the Bon religion , The Maha Sidhachrya Naropa founded the Lamayuru Monastery , he was a Buddhist scholar from Nalanda University who came here in search for his guru Tilopa, a master of Tantra,  the oldest temple  Seng-ge-sgang  was built by Monk Rinchen Zangpo who came from Tibet , great translator of Sanskrit Buddhist texts into Tibetan, he under the patronage  from  King of Ladakh founded 108 Gompas in Ladakh, Spiti , Kinaur and Zanskar region. 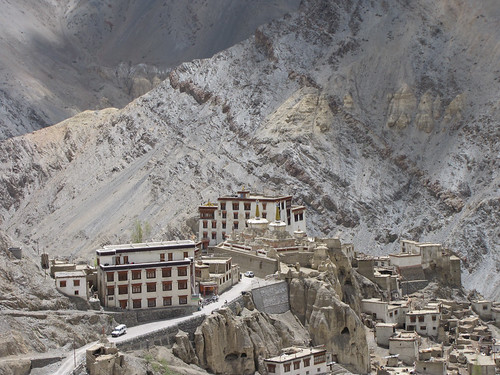 The monastery is made up of a number of shrines and also has a very rich collection of thankas and magnificent wall paintings.

The Dukhang (Assembly hall) is on the right side of the courtyard  with a colourful depiction of the Guardians of the Four Directions. The mural on the left wall of the verandah depicts the proper way for a lama to live ,The temple has an image of Vairocana or the Teaching Buddha is seated on a lion serving as a throne and a Garuda (mythical bird) and sea monsters surround his head . In the wall on the right side of the Dukhang is a small cave with three statues known as Naropa’s cave, where he is supposed to have meditated ,  other two statues are of Marpa (Naropa’s student who became a translator of religious texts and famous poet) and Mila Ras-pa (Marpa’s student and a spiritual head of the red-hat sect of Tibetan Buddhism). The right side of the Dukhang has three complete sets of the Kandshur (the 108 volumes of Buddha’s teachings) 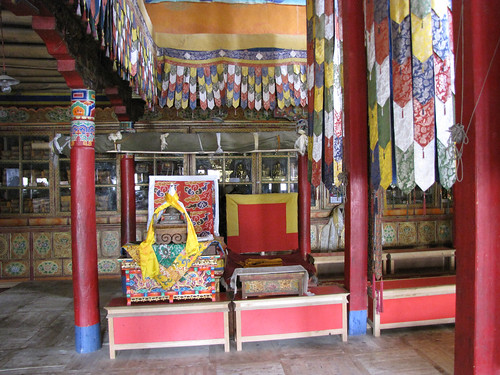 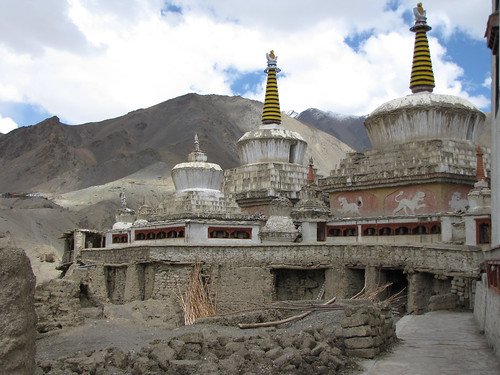 Legend is that this valley there use to be a lake  at the time of Sakyamuni (the Historical Buddha). Nags (holy serpents) used to reside in the lake. Bodhisattva Madhyantaka pridicted that  the lake would eventually be dried, making way for the construction of a Buddhist monastery.  Maha Siddhacharya Naropa,  meditated for years in one of the caves  , a crack developed in the hillside surrounding the lake. When the lake dried out he found a dead  tiger, he constructed the first temple at this site , known as the Singhe Ghang (Lion Mound).  Later, Dharmaraja Jamyang Namgial offered the monastery to Chosje Danma and started  observance of the rituals of the Digung Kargyud School, the monastery was  renamed as Yungdrung Tharpaling. At present the Lamayuru Monastery is served by the successive reincarnations of Skyabsje Toldan Rinpoche. 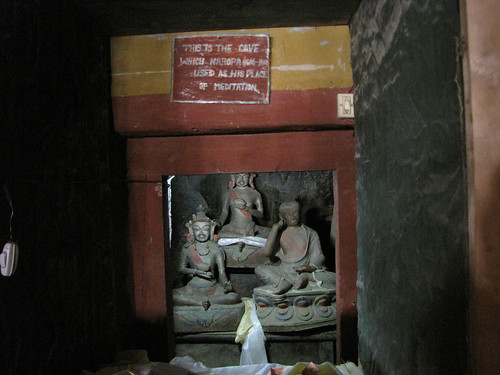 Mahasidhacharya Naropa meditated in this cave

Lamayuru Gompa plays host a masked dance, The Yundrung Kabgyad festival which takes place on the 17th and 18th day of the 5th month of Tibetan lunar calendar which falls in the month of July. The monks from the monasteries of the nearby areas also come to take part in the celebrations.