Dwarkadheesh temple dedicated to Lord Krishna is also known as Jagat Mandir , Dvaramati, Dvaravati, and Kushsthali in the ancient holy books , situated on the west banks of Gujarat on Arabian sea , it is  here Lord Krishna established his capital after moving out of Mathura , is worshiped as Dwarkadheesh , the king of Dwarka  , it is also the place where Lord Vishnu killed the demon named Shankhasura.  some distance from here is one of the 12 Jyotir Lingas (columns of lights) specifically manifesting Lord Shiva named Nageshwar Mahadev is in the sanctified place of Dwarka. 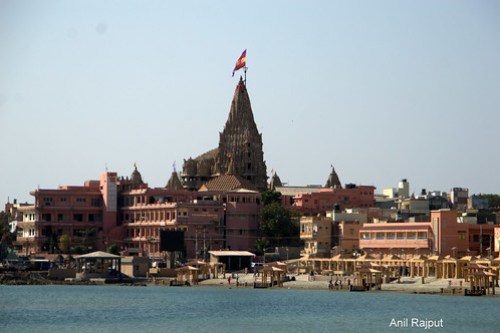 The original city got submerged into the sea,the recent excavations in the sea near the shore confirms the existence of a well fortified area .

The original temple was built by Vajranabhji the Great Grand Son of Lord Krishna at a site which was  a formal residence of Lord, around 400 BC . The present temple was constructed in 16th Century, it rises up to a height of 51.8 meters, consists of 60 exquisitely carved pillars and a number of sculptures ,The temple is built of soft limestone and consists of a sanctum, vestibule and a rectangular hall with porches on three sides. The main entrance is from the North the Moksha Dwar and the gate on South is called the Swarg Dwar leads down 56 steps to river Gomti . On top of the shikhar there is  huge flag made from 52 yards of cloth , it is changed five times in a day . 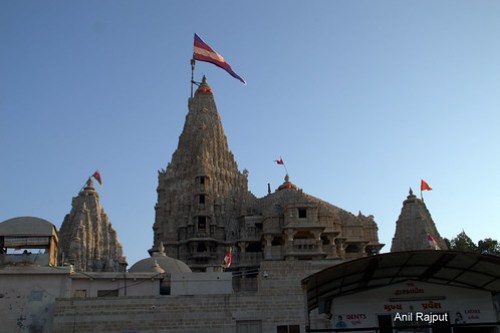 The deity of Lord Dwarkadhish is made of shiny black stone and is about 2.25 ft in height. The four hands of the deity carry a conch, the Sudarshana Chakra ,Gada ( a mace ) and a lotus, and this image is popularly known as ‘Shankh Chakra Gada Padma Chaturbhuj’.

The Temple is considered to be one of the holiest in Chardham , established by Adi Shankaracharya in 8th Century .