Dandi Hanuman Ji temple is situated in Bet Dwarka island about 5 km from the main temple of Lord Krishna , this temple is unique as it is the only temple where Lord Hanuman Ji  though Brhamchari ( bachelor)  is with his son Makardhwaj , without his Mugdhar (Mace). It is a small temple at a spot where Lord Hanuman Ji met his son for the first time  in the sands of Gulf of Kutch at the entrance of Patal lok 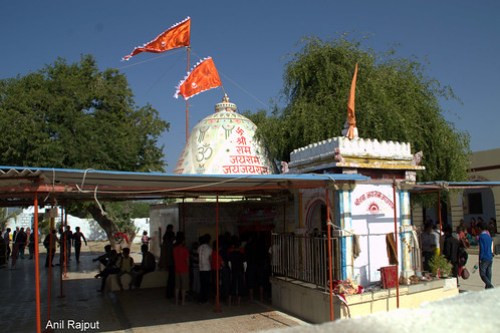 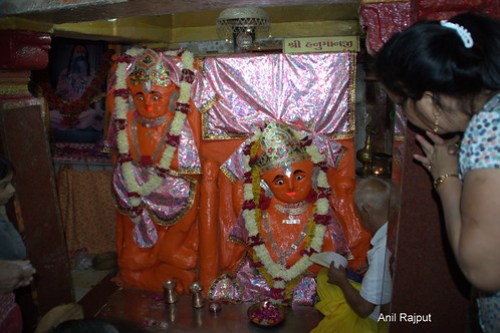 The legend is that  at the time of Ram and Ravan battle , the twin step brothers Ahi Ravan and Mahi Ravan of Ravan disguised them self as Vibhishan and Jamvant , kidnapped Lord Ram and Laxman and took them to Paatal Lok to sacrifice them to their deity , Lord Hanuman went in search and reached the Paatal entrance where he was challenged by a Vanara ( monkey) , upon asking who he is he identified himself as son of Lord Hanuman Ji . Hnuman Ji was Bharamchari ( bachlor ) upon asking him if he ever met his father and how he is father because he is a bachelor , Makardhwaj replied that when Hanuman Ji burnt Lanka with his tail and went to the sea to dip his tail in the water to extinguish the fire at that time the sweat from his body dropped and a  it was swallowed by a Magar (Crocodle ) and he was born in the kitchen of his foster mother Chandersena  who is in service of  the demon twin brothers and he is also employed by them to not to allow any one to enter the Paatal Lok , at this point Lord Hanuman Ji gave his introduction and wanted to enter , hearing the noise Chandersena came out and upon knowing the story agreed to help Lord Hanuman Ji  and after killing the twin brothers Lord Hanuman Ji bring Lord Ram and Laxman back to the safe place , before leaving, upon the request of Chandersena they made Makardhwaj the King of Paatal Lok .

Legend is Lord Krishna requested Lord Hanuman Ji and his son Makardhwaj to take care of security of Bet Dwarka .