Yatra Chardham pilgrimage in Gharwal Himalayas Uttrakhand is a devout wish of a Sanatan Hindu since 8th century the establishment of temples or Dhams by the Adi Shankarcharya to make the Sanatan Dharma more strong which was loosing its prominence because of influence from the Jainism and Buddhism which originated from India and had patronage from many kingdoms in the Indian sub continent also because of the strict disciplined form of Sanatan Dharma described by the Brahamins, all these places were rediscovered and reconstructed  by him  which we see as on today, one wonders as to how a man could have reached here and these temples were constructed at  the places with limited resources and the area which are accessible only for about 5 months in a year . Most of the pilgrims visits the main shrines and ignore the other places which are equally important and part of our Purans and Mythology, I will be introducing my readers to these places and associated legends with it. 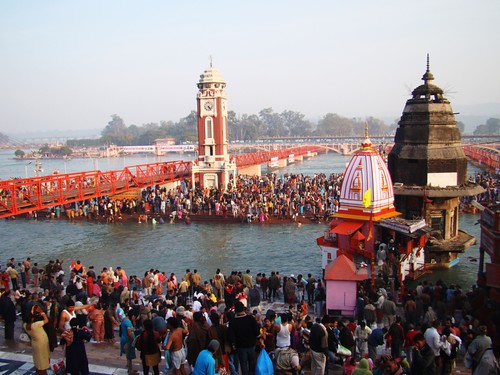 This is the place visited by all the pilgrims , a holy dip in the river Ganges here is considered to be absolving of all the sins, legend is, as a result of Churning of Sea by the Asuras and Devs, the Amrit ( Ambrosia) came out and there was a dispute as to who should have it, in between the Garuda took the urn  from the battle field and flew away, the four drops fell on earth at places Ujjain, Nasik, Prayag (Allahabad) and Hardwar , it is at this place in Hardwar the devotes take a bath on the banks of holy river Ma Ganga.

It is the most ancient temple of India didicated to Chandi or Chandika , it is said that Ma Parvati assumed the  form of Chandi as a attractive beautiful women to attract the Demon brothers Shumbh and Nishumbh who wanted to marry her, she had to kill the demon chieftains Chanda and Munda before killing the two brothers, after the battle was over the Ma Chandi took rest at this place known as Neel Parvat , near by there are two peaks known as the Demons Shumbha and Nishumbha peaks, here  is another  temple dedicated to Ma Anjana mother of lord Hanuman .

It is said that Chandi Devi and Mansa Devi are two forms of Ma Parvati and the temples didicated to each one is always be in close vicinity . The Mansa Devi ( Wish) temple is across the river Ganga on a Bilwa Parvat , Mansa Devi is sister of Nag devta Vasuki and it is a form of Shakti emerged out of the Muni (Sage) Kashapya. It is a Sidh Peeth and people tie a thread to get their wishes fulfilled and return to untie it .

The ancient name of Hardwar is Mayapuri , the Maya Devi is the Adhisthatri deity of Hardwar , it is said that the Naval and heart of godess Sati fell here and it is a Shakti peeth. It is one of the oldest temple built about one thousand years ago, The goddes Maya with three heads and four arms is in the center the other deites are Ma Kamakhya on the right and Ma Kali on the left .

It is from here the Yatra Chardham starts with a holy dip at river Ma Ganga and ends with the Aarti at Har Ki Pauri.