Shey is on Leh Manali road , located near Thikse monastery on a hillock about 15 kms from Leh. Large number of rock carvings, stupas and monastries are on this road , it has also the biggest Chorten field with hundreds of various size of shrines scattered across the desert land scape . Shey Palace and Gompa complex was built in around  1650 AD by the King Deldon Namgyal used it as a summer retreat by the kings of Ladakh, it is in ruins now. Shey Monastery was built in the memory of his father Singay Namgyal within the palace complex .

It is famous for the giant statue of Shakyamuni Budha second largest in Ladakh made of Copper with gold plating. Dogras of Jammu invaded Leh in 1834 Namgyal King abandoend Shey and made Stok acrossed the Indus river as their permanent residence. 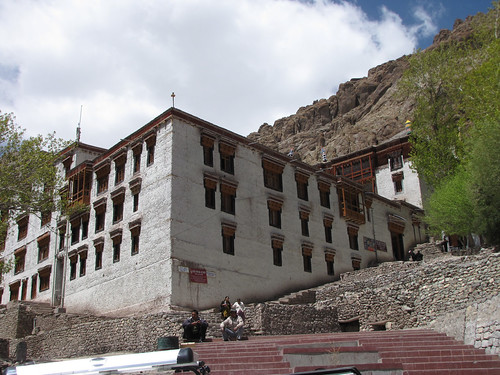 It is famous for the giant statue of Shakyamuni Budha second largest in Ladakh made of Copper with gold plating. Dogras of Jammu invaded Leh in 1834 Namgyal King abandoend Shey and made Stok acrossed the Indus river as their permanent residence.Sahakyamuni Budha statue is 12 meters in height the wall behind has the immage of Sariputra and Maudgalyayana the two disciples of Lord Budha, walls around the statue are painted with images, this statue in the monastry is in three levels , the lowest level shows the sole pointing upwards, murals of Shambunath on middle floor are  in different postures of Budha, the upper dark floor is having butter lamps that burns eternally at altar. Number of wall paintings are displayed on the upper floor , lower flower is has a library and murals of Budha in various hand gestures ( mudras).the temple is constructed in such a way to allow lots of sun light to falls on the walls directly because of this the murals look bright. 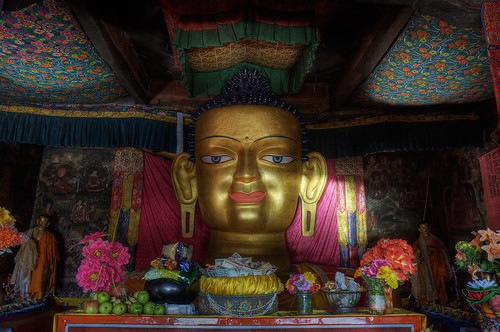 Some distance from the palace is a small shrine built by Sengge Namgyal it houses Sakyamuni large statue in sitting position , here murals and images are similar to the palace shrine it also depicts the 16 Arhats the original deciples of the Budha along with the teachers Padmasambhava , Atisa and Tson-Ka-Pa , carvings are seen on rocks on road to the palace they are of Dhyani Budha one near the palace and other four near the chorten .  All these were crafted by the sculptor from Nepal Sanga Zargar Wanduk and few others their decedents are still living in a village called Chilling.

The official residence (phatong) Lama of the monastery is at the edge of valley and there is a beautiful sight of Indus valley.

There are two  festivals held here every year. The first festival is held at Shey Palace on the 26th and 27th day of the first month of the Tibeten Calander which falls in July or August month  This festival is called “Shey Doo Lhoo” to mark the beginning of the sowing season. The two day monastic celebration is marked by special rituals performed by the monks in the main monastery.  Villagers throng to the monastery in large numbers in a spirit of celebration . The second festival is called the “Shey Rupla” that marks the harvesting season. On this occasion farmers offer the first fruits of the corn at the monastery. A dance called the “Rhupla dance” is performed by two men in tiger costumes. Other forms of folk dances are also performed.

There is a belief that women without children offer special prayers here to Buddha seeking blessings to beget children. 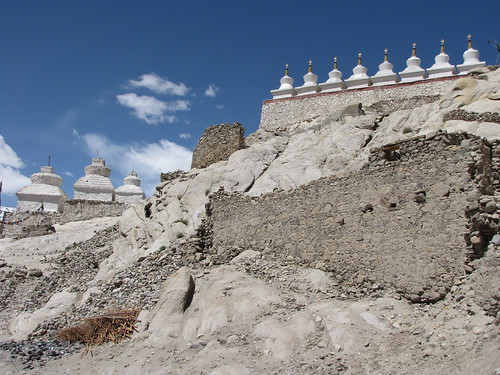 Close to the palace is the funeral ground. The dead are carried in a chair after due rites are performed at home. The body is placed on a chair then carried to the funeral ground in a procession of Lamas and the common people of the village. The chair is then laid in a “tubular walled oven”, as prayers are chanted. The ashes are later scattered in the river.