Lord Buddha’s tallest monolith statue in the world is at Hyderabad India . City of Hyderabad is situated on the banks of Musi river which originates in Anantagiri Hills, about 90 km from here, a tributary of River Krishna. The river divides the city into two parts Hyderabad and Secundrabad.Two dams Himayat Sagar and Osman Sagar were built in 1562 AD Hazrat Hussain Shah Wali built the lake by controlling the water of Musi river during the rule of Ibrahim Quli Qutub Shah, this lake was named Hussain Sagar. It is a man made lake fed by canals from Musi river, spread over an area of aprox. 6 sq. kilometers . 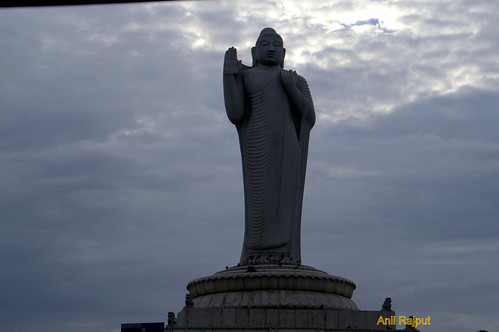 Hyderabad was a major Buddhist center in the time of Emperor Ashoka 3rd century BC .

In 1980s the then Chief Minister of state, Mr. N.T. Ramarao, inspired by the statue of Liberty, shared the idea of having a statue of lord Buddha in the lake. A concrete platform was erected in Hussain Sagar lake which is now known as Rock of Gibraltar. Original plan was to have the statue in the center of lake but due to transportation and Engineering hurdles made it difficult . 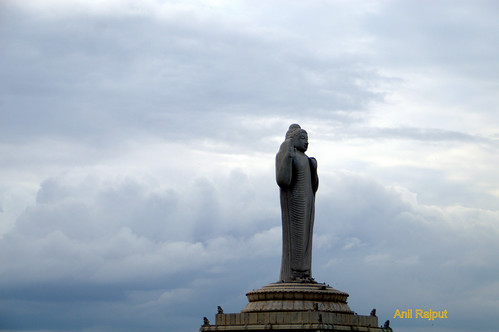 A rock of white granite was found at Raigiri about 65 km from Hyderabad. A team of sculpturers, under the guidance of Architect S. M. Ganapathi Sthapati,It was designed for over an year, started working in 1985. After five years of hard work an 18 meters tall  and weighing 350 tons a monolithic statue of Lord Buddha was carved and transported on the shores of Hussain Sagar Lake, on 10 March 1990 it was then shifted on a barge. But during transportation, an unfortunate accident happened and the statue fell in the lake, killing 10 people. It took two years of salvage operation, on 03 April 1992 it was pulled out from the lake and on 12 April 1992 is was erected on the lotus shaped pedestal .

A dream came true for many Buddhists when on Monday January 2nd  2006 in the afternoon, His Holiness The Dalai Lama  visited the island and consecrated the statue after performing a 30 minute ritual thus giving it the status of a holy pilgrimage.