Tak Thok Gompa Monastery is located at about 46 km from Leh in Shakti village ,  The name Tak Thok in Ladakhi means “Rock Roof” . The monastery was founded around the mid-16th century during the reign of Tshewang Namgyal on a mountainside around a cave in which Padmasambhava is said to have meditated in the 8th century.  Inside the Dukhang, are the statues of Maitreya (the Future Buddha or Buddha of Compassion), Padmasambhava and Dorje Takposal (a manifestation of Padmasambhava). Takthok Monastery also houses the Kandshur, the 108 volumes of Buddha’s teachings.  Behind this image is a small locked door leading to the small cave where Padme Sambhava is supposed to have lived and meditated for three years. This cave is not open to the public. The low roof of the Gompa is the stone of the cliff. 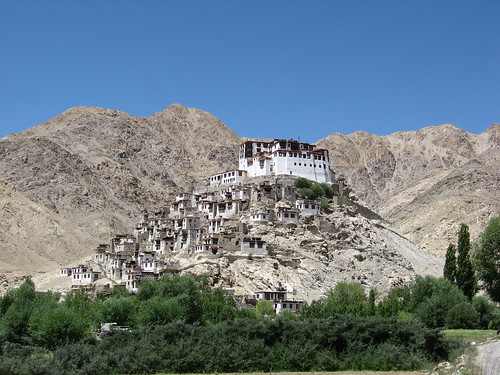 Most of the gompa consists of rooms hollowed out of the stone cliff by nature or man,  the wooden front of the gompa is only a front for the cave , called Duphug ( Tu-Phuk) Lhakhang, is a popular pilgrimage. Buddhists visit to be blessed by dubchu, the sacred water that drips from its ceiling even in winter, when the valley freezes over. The main treasure is an incomplete set of 29 volumes – the title pages lettered in solid silver of excellent craftsmanship and text in pure gold.  Tak-Thok’s Lamas  have developed texts to ward off evil spirits, epidemics and curses. They perform birth and death rites, recite prayers for longevity and wealth, even make astrological predictions. 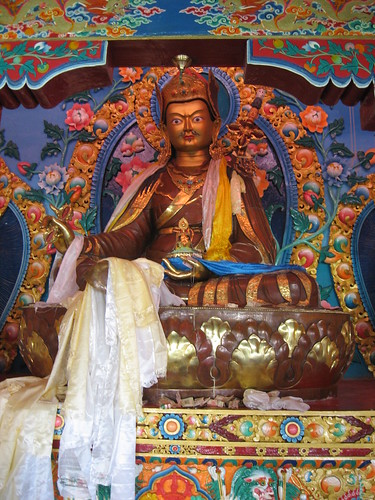 One of the images in Tak Thok gompa Shakti, Leh Ladakh

The Rimpoche or head lama of Tak Thok is from Tibet and is extremely highly regarded by Ladakhis.

Mystic dances are performed by the lamas in the guise of various divinities and legendary characters. They perform the mystic dances as prescribes the protocol, consecrating and destroying the votive offerings ‘Stor-ma‘ in closing of the propitious performance , on the 9th and 10th day of the sixth month of the Tibetan calendar.