Rudraprayag on way to Sri Kedarnath and Sri Badrinath

Rudraprayag is 34 km from Srinagar and 142 km from Rishikesh  situated at a height of 610 meters from sea level surrounded by the Himalayan  mountains it is not only one of the Panch Prayag  ( Five confluence ) or Sangam  with the holy river Alaknanda in Garhwal region of Uttarkhand in Himalayas , the river Mandakini meets the Alaknanda here but also got the religious importance  for the pilgrims travelling to Sri Kedarnath and Sri Badrinath on Yatra Chardham. It is from here the road bifurcate and one goes to Guptkashi then to Gaurikund from here the trek to Sri Kedarnath starts while the other road goes to Joshimath then to Sri Badrinath, in between is Gobind Ghat from here trek to Ghangharia , Valley of Flowers and Hemkund / Lokpal starts 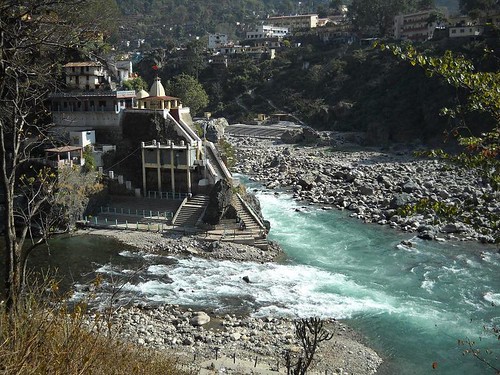 This place is named after the Lord Shiva who appeared here in form of “Rudra” after the Rishi Narad worshiped him and asked for his teachings to learn and master the Music on Rudra Veena ,  the rock where he learned music is called the Narad Shila. Legend is that Lord Shiva meditated here before leaving for Sri Kedarnath the Koteshwar temple on the banks of Alaknanda are the cave temples where the images of Lord are in natural formations of rock (Koti is 10 million, Koteshwar means God of 10 million). It is also said that the  Sati consort of Lord Shiva reborn as Parvati daughter of Himalaya  after she immolated her self in the Yagnakund performed by her father and she could not tolerate the disrespect to her husband the Lord Shiva , Parvati dedicated herself  to be his wife again and to achieve this she performed Tapasya ( Penance ) here. There is a temple dedicated to Ma Chamunda  wife of lord Rudra is worshiped here. It is also said that the Lord Shiva performed the Tandava Nritya  the source of the cycle of creation, preservation and dissolution.