The Somnath Temple , Gujarat also mentioned as Deo Pattan, Prabhas Pattan, or Somnath Pattan is situated in Prabhas Kshetra , of Viraval town on the South – West cost of Gujarat state  of India  , is one of the twelve Jotirlings Shrine of Lord Shiva , the location of this temple, Strange but fact , it lies in a straight line to South Pole, in between  there is only water. no land mass other than the Antarctica ice in between . 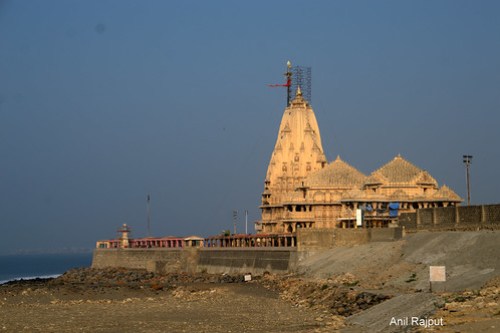 The research done by the Vadic Shodh Sanatan Varanasi on ancient Hindu Puranas (classical text) Prabhas Khand of Skandh Puran. The first Jyotirling Pran Pratistha at Somnath Temple was performed on the third day of Shukla Paksha of Shravan month of the 10th Treta Yug of  Vaivaswati Manvantar i.e. over 70 million years ago . 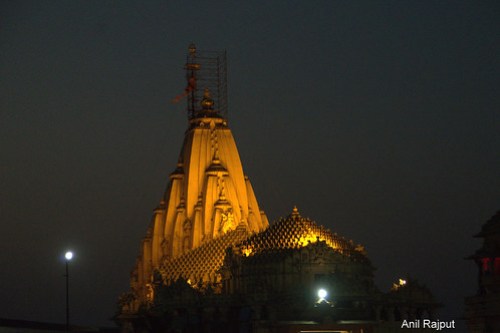 According to legends the first temple was built by Lord Chandra (Moon God) to be relieved from the curse of his father-in-law, Dakasha Prajapati, whose 27 daughter was married to Chandra. Because of curse, Lord Chandra had lost its luster. Then advice from Lord Brahma, Chandra  worship Lord Shiva at this place (Prabhas Tirtha). Pleased with the devotion and (penance) Tapasya Lord blessed him to be partly relieved from the curse , which resulted in fifteen days of reducing shine (Krishna Paksha) and fifteen days for increase in shine ( Shulka Paksha ) In praise , Lord Chandra built a temple in gold. It is said Ravana the king of Lanka and devotee of Lord Shiva built it in silver followed by Lord Krishna built the temple in sandalwood and in the 10th century it was rebuilt in stone by King Bhimdev Solanki. 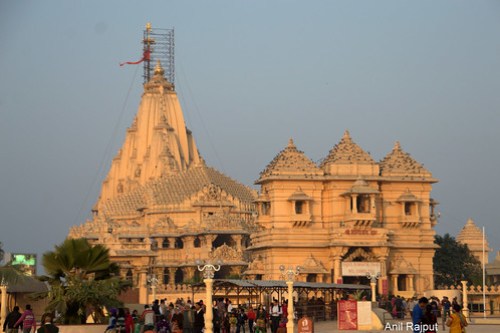 Somnath Temple in the morning

This temple Somnath (the protector of Moon God) and “The shrine eternal” although the temple has been destroyed six times, it has been rebuilt every time. “The Somnath temple signifies that the power of reconstruction is always greater than the power of destruction”

It is said Lord Brahama installed a Bharama Shila and paved way for the construction of the temple. It is also said the Lord Chandra and the other Deva’s requested Lord Shiva to be known as Somchandra and reside in the form of Jotirlinga here eternally.

There are other significant places as per Hindu mythology to visit are Bhalka Tirath , here Lord Krishna was shot by an arrow in his foot, this place have a temple and a legendary tree under which Lord Krishna was taking rest . 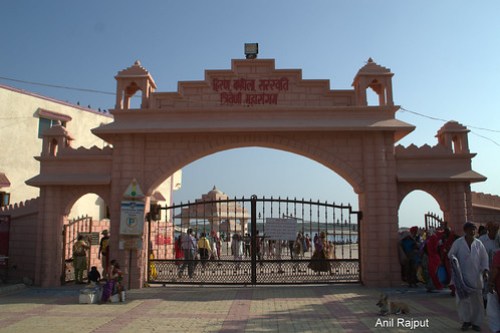 Triveni Ghat where three rivers Hiran , Kapila and legendry Saraswati meets . The temple built by Devi Ahilya Bai Holkar of Indore , The cave dedicated to Lord Krishna’s brother Balram , where he transformed into a snake and went to Patal Lok. A cave and a temple dedicated to  Adi Shankaracharya where he meditated more than thousand years ago .