Ranakpur Jain Temple is situated at about 95 km from Udaipur on road to  Udaipur – Jodhpur, on the banks of Maghai river,  built in 15th century by a Jain businessman Seth Dharna Shah inspired by Acharaya Soma Sunder Suriji , Rana Khumbha who was the then ruler Mewar helped him by giving land in valley of Mount Madri but also advised him to build a city near it now known as Ranakpur, the chief architect Deepaka with high value for art a vision of Nalinigulma Viman ( Viman of Gods) put the devotion of his patron to a dream come true in the form of a magnificent temple. It is also known as Patariyon Ka Mandir 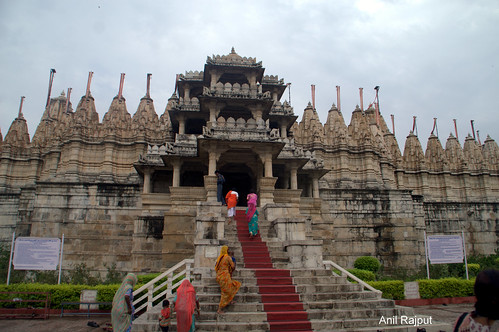 it is the largest and most important Jain temple in India. The Dharna Shah died before the completion of work but before his death he installed the idol of Principal deity Lord Rishabhdeva in 1496 Vikram Samvat (1445 AD aprox.)  his brother Ratanshah carried forward the work with limited resources and could not got the final polish of marble done at many places. It took sixty five years to complete. 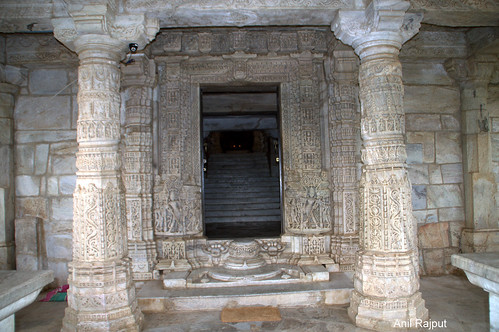 This temple could escape from the invading armies because it was not on the main routes to the battle grounds. 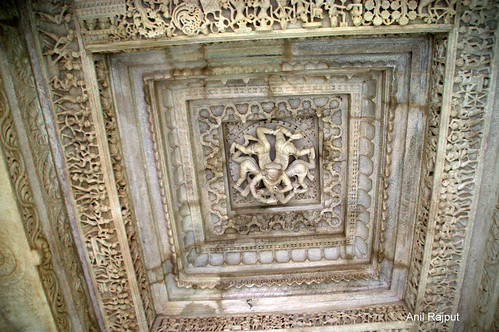 Kechak (Hindu mythological figure) at ceiling above the main entrance

The construction started in 1446 Vikram Samvat (1395 AD aprox.) and completed in 1511 Vikram Samvat ( 1460 AD aprox ) It is a Choumukha Temple ( Four side open) , temple is 60 x 62 meters,  it does not conform to the traditional longitudinal plan as of Indian temples but follows a crisscross one. This plan has four separate entrances, one on each side. Each of these then lead through a series of columned halls to a central arena and the sanctum which has the four faced white marble 6 ft. tall image of Lord Adinath. 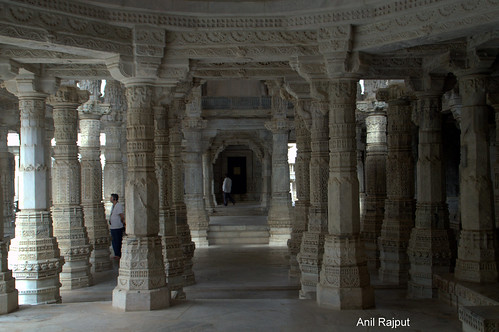 Ceiling at the entrance of Ranakpur temple is a mythological character Kechak a five body one head human is representation of five evils among the humans are Lust (Kaam), Anger (Krodh), Greed (Lobh), Attachment (Moh) and Conceit ( Ahankaar) are to be left behind while one enters the temple.

The artistically carved nymphs playing the flute in various dance postures at a height of 45 feet are an interesting sight.  Rishabhadev Ji  is surrounded by several other smaller shrines and domes. These are in turn surrounded by a Bhamati or range of cells for images, each of which has a roof of its own. 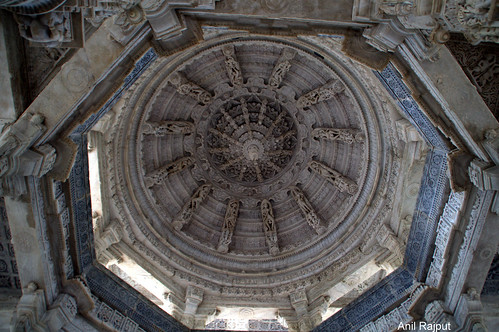 The ceilings of the temples are carved with fine, lace, leaf like motifs, scroll work and geometric patterns. The domes are carved in concentric bands and the brackets connecting the base of the dome with the top are covered with figures of deities. 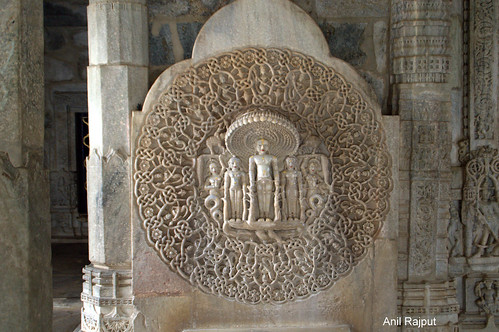 The peculiar character of this temple is there are 1444 pillars carved in exquisite details, support the temple  and not a single pillar is of same design and they all are erected in a manner that from anywhere one can have the view of Lord’s image. 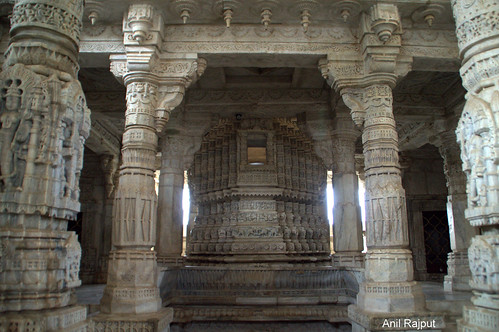 Kalpvriksha or Kalpataru is a divine tree , originated during the Samundramanthan (Churning of Sea) the Raja Indra of Swarglok (Paradise) planted it in Swarglok , it is a wish fulfilling tree , Jains, Buddhists and Hindus holy literature finds mentions at various places with divine powers. 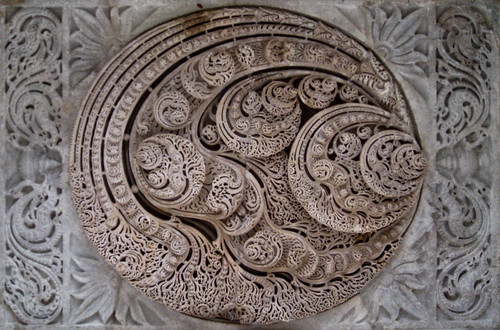 As the sun rays shift through the day the pillars colour change from golden to blueish in the mandap (prayer hall). In the North of temple there are foot prints of Lord Rhishabhdev and a Kalpvriksha tree .

The people who were associated with the construction and daily rituals then 600 years ago, their families are still continuing the job of repairs, and rituals, family of Seth Dharan Shah lives in village Ghanerao. Events related to its construction are recorded on a copper plate inscribed in Sanskrit .