It was many generations before the Sikh community was introduced to Hemkund Sahib, was worshiped by the local Bhotia and Gharwali community who lives in the border area of India and Tibet and nearby villages of Joshimath use to come and pay their respect to the Lokpal or Lakshman the younger brother of Lord Ram , it is believed that in his previous birth as Shesnag meditated in the lake here 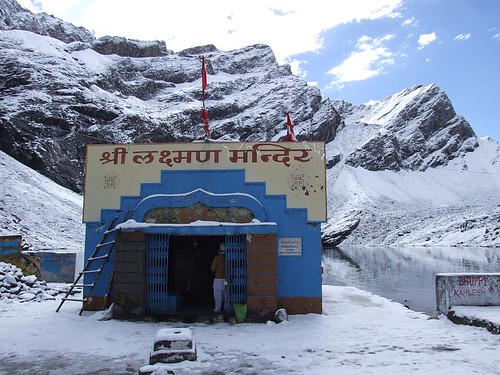 Situated  at an altitude of 4329 mts, (14,200 ft) in the Garhwal Himalayas , on the banks of a glacier lake, surrounded by several towering pinnacles of snow, reflected in its clear water. Surrounded  by the ‘Saptashringa’ Peaks (seven snow-clad peaks, including the Hathi Parvat), also called Hemkund Parvat, the lake mirrors its surroundings on the crystal-clear waters. It is the source of the Hem Ganga stream that merges with the Pushpawati stream flowing from the Valley of Flowers at village Ghangharia (Gobind Dham). From here onwards the river is called Laxman Ganga. This valley had been earlier known to the local residents as the Bhyundar Valley . This places is accessible from Gobind Ghat ( 20 km from Joshimath on Sri Badrinath Highway) a trek of 13 km up hill steep climb or helicopter a 7 minute flight to Ghangharia and the 6 km trek by Palki , mules, or in basket carried by porter on his back. 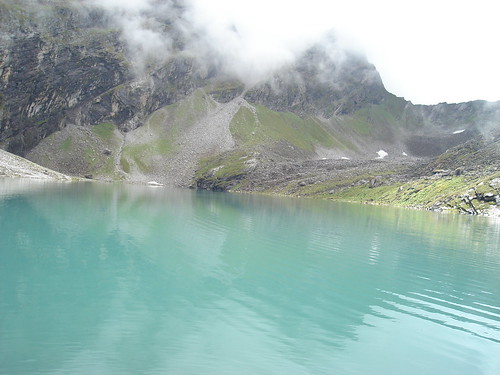 The stories about this place have mentions in Puranas (ancient books of Indian mythology) and the Hindu epics (the Mahabharata and the Ramayana). The sanctity of Lokpal is attributable to tales of Lakshman, (brother of Lord Rama) Goddess Durga, the Pandavas and some Rishis as well. Lakshman is said to have meditated or done penance here . In a popular story, Lakshman was brought to the shore of Lokpal after being mortally wounded in battle with Meghnad .

Another story related to Lakshman is , during a previous incarnation as a seven -headed serpent meditated under the water at Lokpal and lord Vishnu slept on his back. In a variation of the same theme, the snake was called Shesh Nag,  its tail was wrapped around the base of the mountain.

In a third legend, it is said that during Sat Yug, (the first of four ages according to Hindu mythology), fierce demons called ‘Dhents’  were terrorizing humans and gods. The goddess Durga was engaged in battle with the demons Bel and Subel , she had to flee and take refuge in the mountains. There, she approached a great Rishi who was meditating, seated on a lion skin. When Durga asked for his help, he told her to hide near him. The demons came the Rishi said that ” the mother of all, had come to him and it his duty to protect her”. The demons were infuriated , they were about to attack him , the Rishi said he and his disciples do not kill any one but he will  create a Khattri ( Warior) to kill them all ,  he got up and shook the lion skin , from the dust of lion skin there emerged a shakti (power) in the form of a strong Khattri (warrior) youth clad in lion skins and carrying a sword. The Rishi commanded the youth to kill the demons . When the youth had destroyed all the demons, the goddess appeared before him and gave him a sword with the blessing that he would henceforth be known as Dusht Daman, the ‘destroyer of evil’ since he came from the skin (khal) of a lion, he would also earn renown as Khalsa. The goddess departed after telling the youth that he would be given a mission to fight like a lion (Singh) in a later incarnation as a human being and for that he would create the Khalsa ( ‘The Pure).  The Rishi mentioned above is also known with references in various holy scriptures as Samundh Rishi, Rishi Medhasa, Rishi Bishala,  and Asan Rishi , the story of Dusht Daman’s battle is recorded in the Brahma Purana and some of the characters and events also resemble those in the Markandeya Purana, referred to in the Dasam Granth ( the Sikh Holy Book) References to Lokpal and Sapatsring also appear in the Skandha Purana. 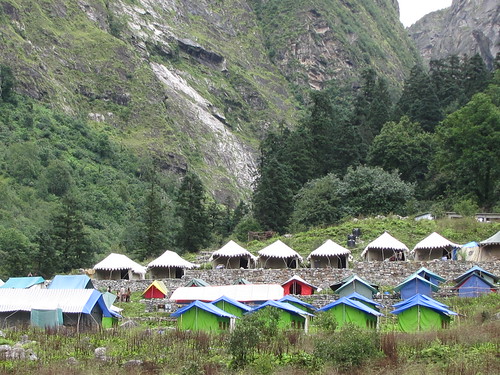 Lokpal also reputed to be an ancient place of pilgrimage for the Tibetan people.  The local Garhwali people have followed a tradition of visiting the temple on the shore of the lake on three annual festivals held during the summer season: Rakshabandhan, Janam Ashtami, and Durga Ashtami ( Nanda Ashtami) The sacred journey was made primarily by women, both Garhwali villagers from the valley below Lokpal and villagers of Bhotia (Indo-Tibetan) ancestry from neighboring valleys. Out of respect for the purity of the water and the surrounding landscape, they made the steep climb barefoot, clad only in white cotton dhoti. The women left their clothes and shoes behind at a halting place set in a glade of fir trees. This place became the site of what is today Gobind Dham or Ghangaria, named after the ghagara (petticoats or skirts ) which the pilgrims would leave there. The women would spend the night singing songs of the goddess, and at dawn they would set out to climb the slope to the lake, at the Lokpal lake . They would bathe in the cold water, and pray to Lakshman for the blessing of a son, a better future, the health of their menfolk, or a cure for sickness.