Sindhu Ghat is situated at 10 km up stream the Indus River from Leh near the Shey , it is a peaceful river bank   The Sindhu          ( Indus ) river originates near Mansarover lake and  Mt. Kailash in Tibet enters in to India and flows through the Leh Valley and the enters into Pakistan , Sindhu is Sanskrit word and its translation is ” Large water Body” . The importance of this river to us is it has given our country the name India and people living here are called the Hindu which is the distorted name of Sindhu in the Arab world. It is one of the seven most sacred rivers in India . 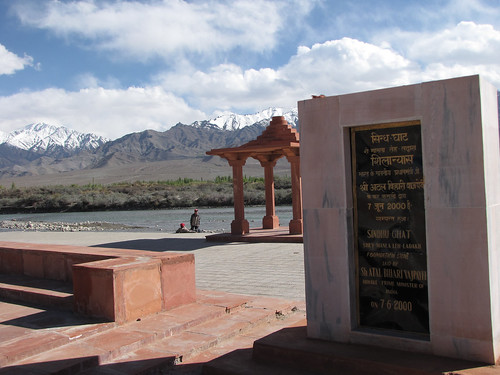 Sindhu Darshan festival is celebrated every year on Guru Purnima ( Full moon of June)  Festival which takes place over three days every year is the perfect time to visit the remote regions of Leh and Ladakh. The Ghat is in Shey Manla, about  8 km from Leh. People travel for a Darshan and Puja of the River Sindhu (Indus), this festival is also a symbolic salute to the brave soldiers of India who have bravely fought the odds at Siachin, Kargil & other places. Mr. Lal Krishan Adwani( then Dy. Prime Minister) who migrated from Sindh in 1947  now in Pakistan, visited Leh in 1995  he started the Sindhu Darshan Abhiyan as Sindhi’s worship Indus ( Sindhu).  Festival was first time organized in the year 1997 and now it is a regular feature . In 2006, this popular spring festival of Ladakh was renamed ‘Ladakh Singhey Khabab Spring Festival’ to bring in more Ladakhi flavor and local involvement. The ceremony is conducted by a joint association of Ladakh Buddhist Association, Shia Majlis, Sunni Anjuman, Christian Moravian Church, Hindu Trust and Sikh Gurudwara Prabhandak Committee. As a part of the ritual, fifty senior Lamas conduct a prayer on the banks of the river. 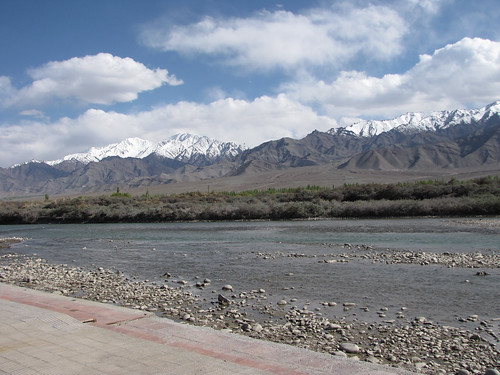 The Greeks called it Sinthus , Romans called it Sindus,  Chinese called it Sintow and Persians called it Ab-e-Sindh , It originates from Tibet enters into India and flows in between the Himalayas and Karakoram , it enters into Pakistan in the Baltistan region flowing through the Skardu , having tributaries from Hindukush , Gilgit and  Naga parbat, Jhelem meets in Kashmir of Pakistan side  it enters Pakistan Punjab plains where it meets Ravi , Satluj and Vyas rivers before meeting the Arabian Sea at Karachi forming the Delta in Sindh .