Lakhpat once a port on the Arabian sea at the junction of Kori creek and Rann of Kutch. It was abandoned after the 1819 AD strong earthquake which changed the flow of  Sindhu (Indus) River  towards further North and a natural dam known as the Allahbund  was formed due to which the Great Rann got dried up . It is in north-west corner of Kutch is an almost dilapidated old town that speaks of a glorious past. Lakhpat, the literal meaning of which is city of millionaires is now nothing, but a small village that is inhabited by a few hundreds and serves as an outpost of the India Border Security Force ( BSF) facing Pakistan. If weather is clear one can see the notorious Harami Nalah from the post . 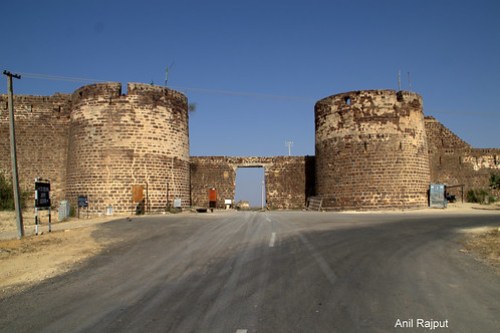 Lakhpat is surrounded by a 7 km fortified wall , believed to have been built by Rao Lakhpatji in the middle of the 18th century and extended further under the supervision of the Army Commander Fatheh Mohmmad in 1801 AD. to defend the kingdom as well as the port from invasions by Sindhi rulers, the walls of the fort are still intact for the most part. The Bhuj Waro Nako , gate opens towards Bhuj , collection on Toll both here  from the  visitors and traders was 1 Lakh Kori to the Lakhpat town , it was well guarded by soldiers. Near Lakhpat was Koteri (Kotri) a landing place on the bank of river  Sindhu ( Indus ) where  ferryboats regularly sailed ,  loaded with cattle and merchandise. From Koteri, the goods were transported on camels to the eastern part of the Indus delta, and distributed throughout the inhabited districts of the Thar. 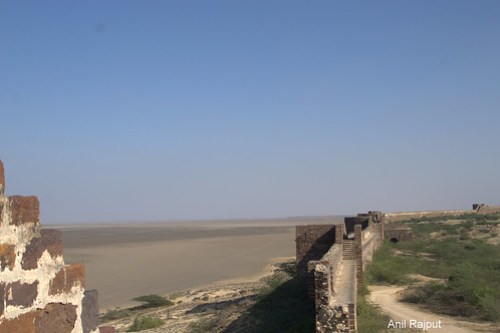 Guru Nanak Dev ji stayed at Lakhpat  during his trips to Mecca and Medina (Saudi Arabia). This place was a  seat of the Udasi Panth until 1972 under the Last Sevadar Baba Mool Dass Hari Dass . ( Udasi Panth  was founded by Sri Chand son of Guru Nanak Dev Ji  ) . Rare treasures are  preserved  including the “Charan Paduka” – Khadvas (wooden footwear) that belonged to Guru Nanak Dev ji.  The present structure is plastered and painted but old wooden doors, pillars and roof are intact and converted into a Gurudwara , there are few lines scripted in LariGurmukhi on walls, it came out when layers of plaster was removed, this script is no more in use. In 16th century it was an important departure point for Muslims making Hajj to Medina and Mecca  at that time Lakhpat was known as “Basta Bander” 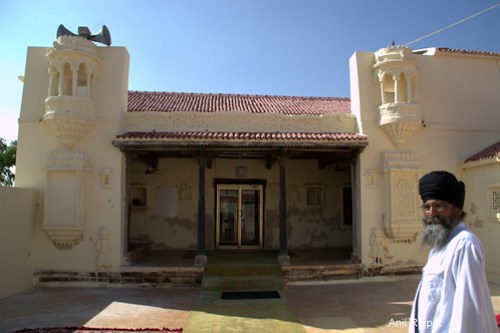 A Sufi Saint Pir Gaus Mohammad equally respected by Hindu and Muslim community A Thirteenth Hijra century poet- lived in Lakhpat, Kutch, Sindh. He passed away in 1873 AD / 1290 AH  he was known as a great healer and for his songs about Lord Krishna. Pir Manthar Shah was a contemporary poet and an associate to Pir Ghous Mohammed also lived in Lakhpat . A black stone structure is having beautiful carvings ,  It is an octagonal, domed structure with four entrances, the inner walls are decorated with verses from the Koran using beautiful calligraphy. 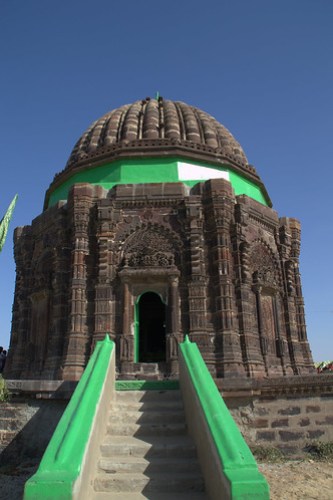 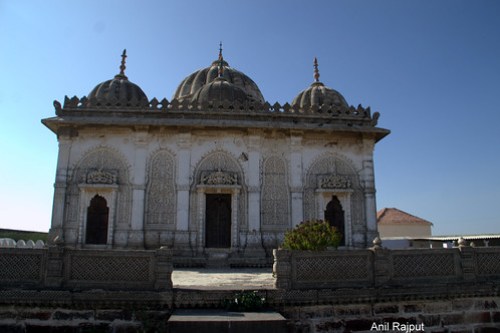 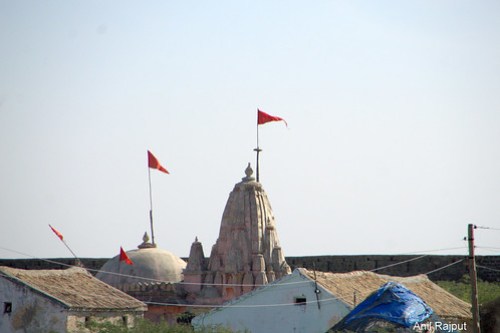 Hatkeshwar Temple dedicated to Lord Shiva  houses fossilized shells . There are three Talavs (Water bodies) inside the fort  Brahmasar, Nagrai and Champasar ,  the first  two when over flowed  fill the third. All the Talavs receives fresh rainwater and has been a source of drinking water the first two Talav were used for bathing and washing purposes. Champasar Talav water was used for cattle and animals .

There are about 70 Muslim families and 10 Hindu families  living in Lakhpat and all Muslim and Hindu festivals are celebrated together , in particular the Navaratri festival when the entire Lakhpat performs the Dandia dances together for eight nights as told  by Abu Bhai only postman of  Lakhpat , till 2005 there was a post office which is now shifted to Gadudi 20 km away, most of the families are in fishing and few are in agriculture job . 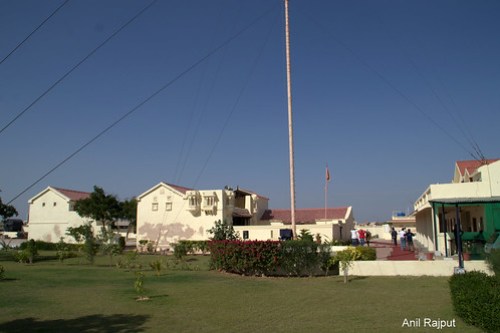 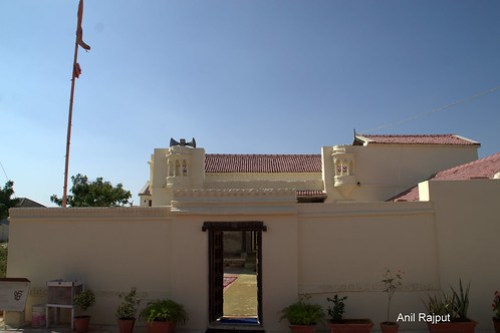 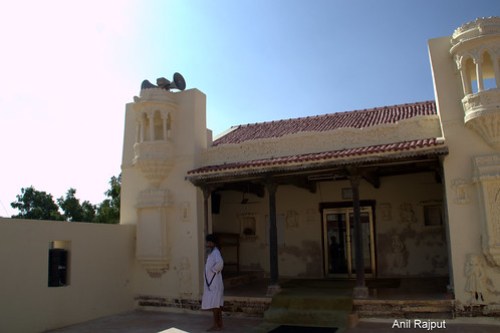 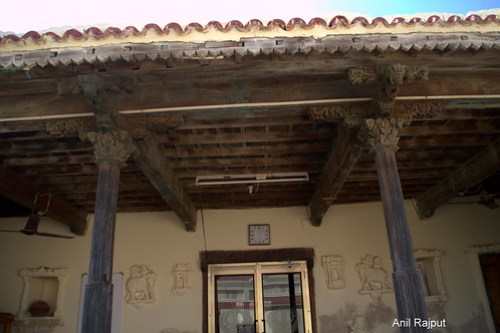 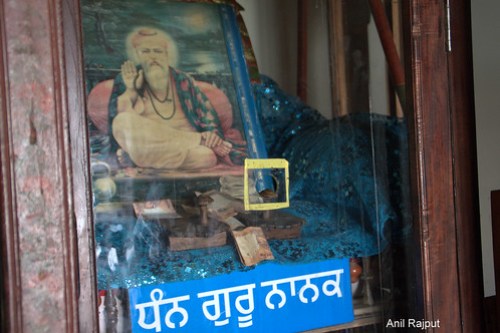 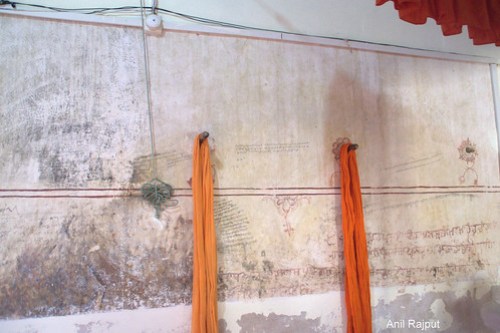 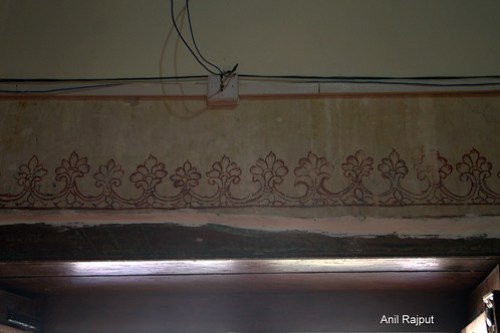