Mulbek is located on a Srinagar – Leh NH 1 D National Highway 45 km from Kargil and and  Leh is further 197 km , it is at an altitude of 3304 meters from sea , just a kilometer from the town is the famous statue of Chamba  the figure of Maitreya Budha , represents the important part of Gandhara Art , on the main National highway. 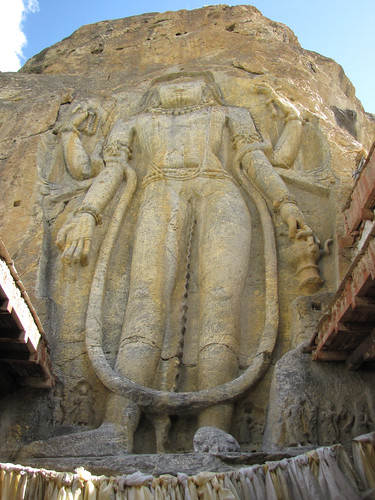 The scholars believe it to be of 8th centenary but there is a thought it is of a Kushan period about 1800 years old. 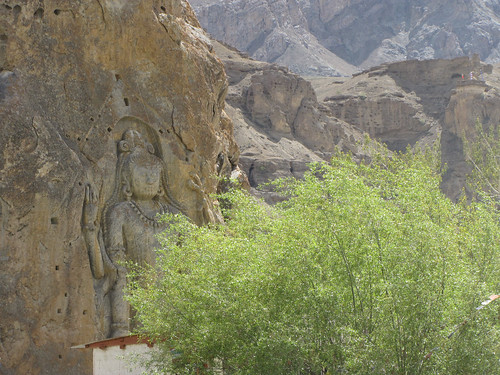 There is an inscription on a near by rocks  orders from the King  Lde for not to sacrifice a goat at the altar of a deity , there is also an inscription that this order of King is too hard if goat is not sacrificed what will the deity say .

Shergol It is a  picturesque village of the Wakha river Valley  it  is situated across the river, right of the Kargil-Leh road. This village is full of Popalar trees , orchards of Walnut and Apricots The main attraction is a cave monastery which is visible from a far as a white speck against the vertically rising ochre hill from which it appears to hanging  out. Below this small monastery is a larger Buddhist nunnery with about a dozen residents. The village is accessible by the motorable road that branches off from the Kargil-Leh road, about 5 km before  Mulbek. Shergol is a convenient base for an exciting 4-day trek across the mountain range into the Suru valley. It is also the  base for visiting Urgyan-Dzong, a meditation retreat lying deep inside the mountains surrounding the Wakha River valley. 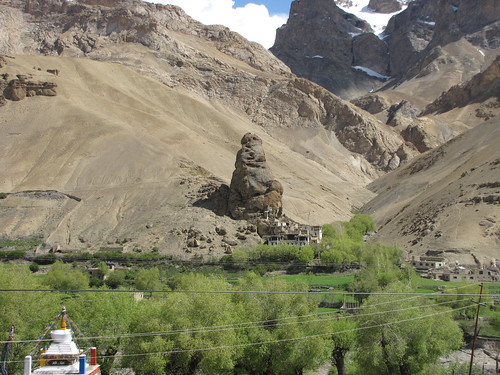 Wakha Rgyal tucked away inside the picturesque upper part of the Wakha Valley, up streams of Mulbek.                         Mulbek Gompa : Situated  atop a rocky cliff, Mulbek Gompa (monastery) dominates the valley. It is easy to see why in bygone times this site served as an outpost to guard the caravan route. Like all Buddhists monasteries it is adorned by frescoes and statues . 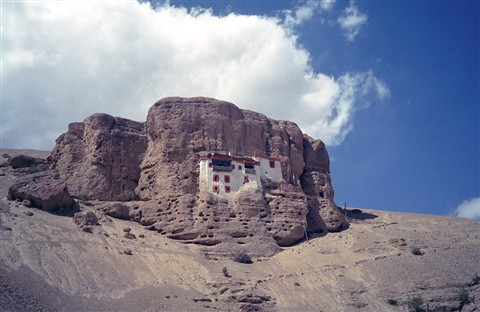 Rgyal gives the appearance of a medieval settlement of cave dwellings transported in to the modern times with some improvements and extensions. The houses, neatly white-washed and closely stacked, are dug into the sheer face of a vertical cliff that rises high above the green valley . From a far the village looks like a colony of beehives hanging from the  Cliff side